The latest victims were all in their 70s or older. Five were men and three were women, and all eight had underlying high-risk health conditions. Two were Dallas residents, and one each lived in Addison, Cedar Hill, Farmers Branch, Lancaster, Mesquite and Seagoville.

County Judge Clay Jenkins said in a written statement that 400,000 vaccine shots have been given at Fair Park as of Thursday, which he said means the site “has given more vaccine than any other site in Texas by far.”

“We are in a race against time and the virus to reach herd immunity before it can successfully mutate into a form that is vaccine-resistant,” Jenkins said. “Getting yourself and everyone vaccinated is not only important for your family and our community, it is also important for America’s economy and well-being.” 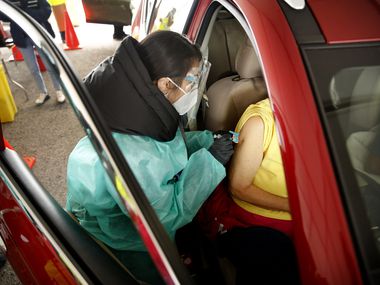 The average number of new daily cases in the county for the last two weeks is 248. For the previous 14-day period, the average was 277.

Health officials use hospitalizations, intensive care admissions and emergency room visits as key metrics to track the real-time impact of COVID-19 in the county. In the 24-hour period that ended Wednesday, 194 COVID-19 patients were in acute care in hospitals in the county. During the same period, 438 ER visits were for symptoms of the disease.

Across the state, 3,341 more cases were reported Thursday, including 2,990 that are new and 351 older ones recently reported by labs.

The latest victims include two men and one woman in their 60s to 80s. Two were from Fort Worth and one was from North Richland Hills. All had underlying high-risk health conditions.

According to the county, 156 people are hospitalized with the virus.

According to the state, 704,184 people in Tarrant County have received at least one dose of a coronavirus vaccine, while 469,457 — 29% of the county’s population 16 and older — are fully vaccinated.

The state added one death and 70 cases to Collin County’s totals Thursday.

No details about the latest victim were available.

According to the county, 80 people are hospitalized with the virus.

The county said it will close its vaccination clinics Friday due to the possibility of severe weather.

DCPH COVID-19 vaccine clinic originally scheduled for Fri 4/23 is cancelled due to the threat of severe weather, including lightning and hail. (1/_) pic.twitter.com/LPaYmdoMyo

According to the county, 21 people are hospitalized with the virus.