Updated at 8:18 p.m.: Revised to include Dallas County lowering its threat level.

As coronavirus hospitalizations in Dallas County remained at their lowest levels since last spring, Parkland Memorial Hospital closed its COVID-19 intensive care units on Tuesday and the county lowered its threat level for the first time in more than five months.

About two dozen COVID-19 patients still were being treated at the hospital, but the closure of the units dedicated to the disease was a symbolic milestone in the fight against COVID-19 a little more than a year after the pandemic reached North Texas.

The latest victims were mostly in their 60s or older. Twelve were men and seven were women, and all but one had underlying high-risk health conditions.

Seven of the victims were Dallas residents, three were from Mesquite, two each were from Garland and Seagoville, and one each lived in Addison, DeSoto, Grand Prairie, Irving and Lancaster.

County Judge Clay Jenkins said in a written statement that, with all Texans 16 and older becoming eligible to be vaccinated starting next week, people should register for vaccinations at as many places as they are willing to go to.

“It has been a tough year, but we are winning,” Jenkins said. “Let us focus on all the things for which we have to be grateful and together we will defeat COVID-19.”

Jenkins said Tuesday evening that the county’s public-health committee had lowered the coronavirus threat level to orange from red, where it had been since mid-October.

In the orange zone, the risk of coronavirus transmission is considered moderate. People in high-risk groups or older than 65 are still urged to avoid in-person activities, and precautions such as mask-wearing and social distancing should be taken when in public.

A number of activities, such as attending entertainment events and going to the movies are still discouraged and should only be considered when physical distancing is possible, according to the county’s guidelines. Shopping trips should still be limited, and getting meals to-go is preferable to dining in restaurants.

Officials said two of the new cases were the first Dallas County cases of the B.1.429 strain of the coronavirus, a more-contagious variant that emerged in California. There have been 14 cases of the B.1.1.7, or U.K., variant, and one case of the B.1.526, or New York, variant.

Health officials use hospitalizations, intensive care admissions and emergency room visits as key metrics to track the real-time impact of COVID-19 in the county. In the 24-hour period that ended Monday, 193 COVID-19 patients were in acute care in hospitals in the county. During the same period, 287 ER visits were for symptoms of the disease. 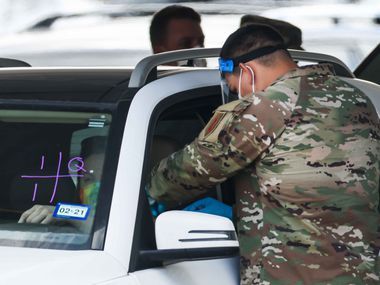 Across the state, 4,595 more cases were reported Tuesday, including 4,269 new cases and 326 older ones recently reported by labs.

The latest victims were three Fort Worth men in their 40s, 70s and 80s, and a White Settlement man in his 70s. Three of the four had underlying high-risk health conditions.

According to the county, 218 people are hospitalized with the virus.

According to the state, 395,739 people in Tarrant County have received at least one dose of a coronavirus vaccine, while 197,660 — 12.4% of the county’s population 16 and older — are fully vaccinated.

The Texas Department of State Health Services did not provide an explanation for why the number of fully vaccinated residents was roughly 16,000 lower than what it reported Monday. A similar, but much smaller, discrepancy last week was caused by a provider entering data incorrectly, DSHS said.

According to the county, 148 people are hospitalized with the virus.

« Is Karl Jacobs okay? Here’s why YouTuber took a break from Internet after experiencing ‘anxiety and headache’
Coronavirus in Minnesota: variants ‘dominating’ case spread in the state »