A smattering of places, mainly across the Asia Pacific region, have posted breathtaking victories in the battle against Covid-19 by effectively wiping it out within their borders. Now they face a fresh test: rejoining the rest of the world, which is still awash in the pathogen.

In some ways, the success of “Covid Zero” locations is becoming a straitjacket. As cities like New York and London return to in-person dealmaking and business as usual -- tolerating hundreds of daily cases as vaccination gathers pace -- financial hubs like Singapore and Hong Kong risk being left behind as they maintain stringent border curbs and try to stamp out single-digit flareups.

After a brutal 18 months that claimed 3.3 million lives worldwide, nations like China, Singapore, Australia and New Zealand have suffered fewer deaths during the entire pandemic than many countries, even highly vaccinated ones, continue to log in a matter of days.

That achievement has allowed people to have largely normal lives for much of the past year. Some haven’t even had to wear masks. But sustaining this vaunted status has also required stop-start lockdown cycles, near-blanket bans on international travel and strict quarantine policies. The few travelers permitted to enter have had to spend weeks in total confinement, unable to leave a hotel room.

Now that mass inoculation drives are allowing other parts of the world to normalize and open up international travel, experts and residents are starting to question whether walling off from Covid is worth the trade-off, if implemented long-term.

“The whole world is not going to be Covid Zero,” said Rupali Limaye, director of behavioral and implementation science at the International Vaccine Access Center at Johns Hopkins School of Public Health. “That’s not an option here.”

Read More: The Best and Worst Places to Be as Variants Outrace Vaccines

Aggressive reactions to tiny caseloads may seem overblown to observers in countries facing thousands of infections a day, but the aim is to snuff out coronavirus before more disruptive restrictions like months-long lockdowns are needed, and largely the strategy has worked. Still, the slower pace of vaccination in these places, and the threat of new variants, has meant that measures have become more and more onerous.

New York currently logs 95 new daily cases per million people, and the U.S. has just lifted its mask mandate for those vaccinated. Singapore found 4.2 new cases per million on Thursday, lifting locally acquired cases to the highest level since July last year, and is warning that the situation is on a “knife’s edge.” The city-state introduced tighter border restrictions and limited social gatherings after the city of 5.7 million reported 60 locally transmitted infections in a week.

Meanwhile, Taiwan recorded 16 local cases on Wednesday -- a daily record high -- and promptly restricted access to gyms and other public venues. In Hong Kong, anyone living in the same building as a person infected with a new Covid variant was required to spend as much as three weeks in government isolation until the policy changed last week. Australia has said that it likely won’t open its international borders until the second half of 2022. 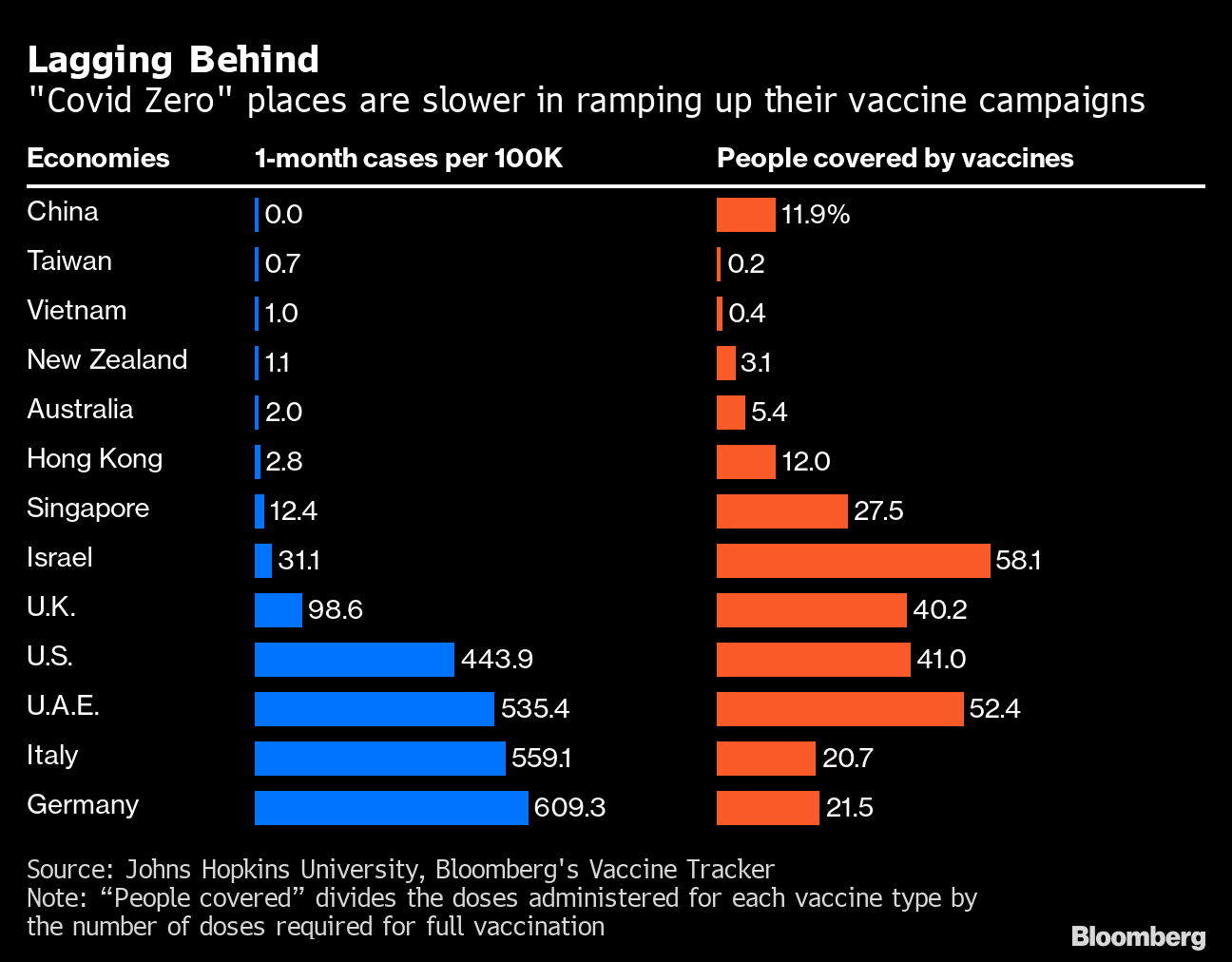 “Because we have been so successful, we are even more risk-averse than we were before,” said Peter Collignon, a professor of infectious diseases at the Australian National University Medical School in Canberra.

“We are very intolerant of letting any Covid come into the country. The fear has almost gotten out of proportion to what the risk is.”

Continued isolation is the price these places will have to pay to maintain this approach in the longer term, as other parts of the world learn to tolerate some infections as long as medical systems aren’t overwhelmed.

Most experts agree that the virus is unlikely to disappear completely. Instead, it is expected to become endemic, meaning it will circulate at some level without sparking the deadly outbreaks seen since late 2019.

Read More: Why Even With Vaccines, Covid-19 Will Always Be With Us

To maintain zero infection rates, these economies will have to implement measures that are harsher and more strict, said Donald Low, professor at the Institute of Public Policy of the Hong Kong University of Science and Technology.

“This is neither wise nor tenable for much longer,” he said. “All this puts the places that have done well to suppress Covid-19 so far at a serious disadvantage as their societies -- not having been exposed to the possibility of Covid-19 becoming endemic -- are not willing to accept any relaxation of measures that may put their health at risk.”

Meanwhile, many countries -- particularly those in the west that are awash in vaccines -- are starting to reopen.

Travelers from England and Scotland will be permitted to visit a dozen countries without quarantining from 17 May. In the U.S., where about 35,000 people were diagnosed with the virus on May 12, the strict quarantine rules that prevented the import of the pathogen to Covid Zero countries never existed. Most states are starting to lift their pandemic restrictions and 25 have removed them completely.

For Hong Kong and Singapore, the drawbacks of maintaining an elimination strategy as financial centers like London and New York City re-open may be significant. As aviation hubs and financial centers, both cities’ economies are particularly reliant on travel, compared to export-led economies such as China and Australia that can stomach being shut for longer. In 2019, Hong Kong was the world’s most popular city with international visitors -- even after months of political unrest -- while Singapore came in fourth place. London was at No. 5 and New York at No. 11.

A major obstacle to reopening is the slow vaccine rollout in these Covid havens, due to a combination of supply limitations and citizens’ lack of urgency about fronting up for shots.

China has administered enough vaccinations for about 12% of its population. In Australia the figure is 5% and in New Zealand, just 3%. Meanwhile, more than one-third of the U.S. -- and more than one quarter of the U.K. -- is fully protected, as those countries’ failure to mitigate the spread of Covid meant vaccination was prioritized.

In places with very few infections, the public hasn’t developed the searing fear of the virus that emerged in the U.S., Europe, India and Brazil, where many families were cut off from dying loved ones or left unable to visit elderly relatives in care facilities.

In fact many residents fear the vaccine more than the virus. Reports of routine side effects including fever and injection-site pain, as well as rare and potentially deadly complications like blood clots, have put people off. The lack of an immediate threat from Covid means some people would rather wait until the vaccines are more progressed.

Not everyone agrees that elimination can’t be pursued long-term. For Michael Baker, professor of public health at the University of Otago in Wellington, New Zealand, the approach’s benefits are evident in how deaths in the country -- from any cause -- actually dropped in 2020.

“The evidence is overwhelming for zero Covid if you can achieve it,” he said. “If there had been the commitment to having elimination as the first option, we may have been able to eliminate it entirely and avoided this global disaster.”

He’s still hopeful that the strategy will be more broadly adopted with the help of vaccination, so that coronavirus will follow the measles model rather than an endemic one.

“With the measles approach, you largely stop outbreaks in every country that has high coverage,” he said.

Nonetheless, Covid havens face a growing dilemma. If vaccinations don’t pick up pace, they risk being stuck in a perpetual cycle, unable to move past the pandemic.

“If their vaccination rates are low, that further jeopardizes their ability to open up,” Low said. “If so, the earlier ‘victory’ of these places over Covid-19 would have been a Pyrrhic one.”

« how it cured my anxiety
Can Benadryl Cause Anxiety? Side Effects and Precautions »