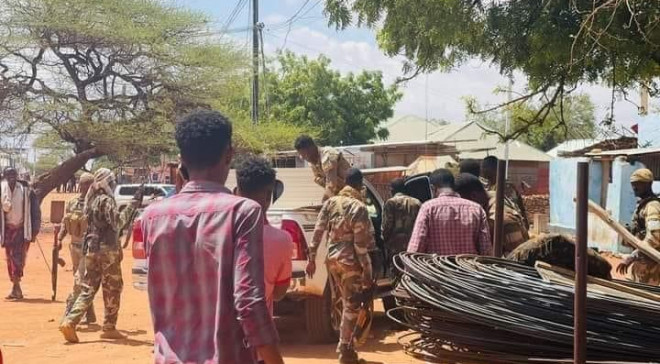 MOGADISHU, Soomaaliya - Security forces in Galmadug have retaken Guriel town from Ahlu Sunna Wal Jama'a [ASWJ], a Sufi militia group that has been at loggerheads with Somali National Army [SNA] and other government troops in Somalia.

Over three weeks ago, ASWJ took over the town which is located in Galgadud after a short gun battle with Somali forces, arguing that its main intention is to fight Al-Shabaab militants in the region. The militia was initially working with the government.

The state media reported that Guriel Governor Anas Abdi Maalim confirmed that Galmudug regional troops backed by SNA had retaken control of most of the town with minimal resistance. The town was previously under the defiant Sufi militia.

Multiple sources confirmed that government security forces were sighted in most parts of the town for the better part of Friday night just after a week-long military build-up. A gunfight broke out on Saturday morning as the allied troops moved into the city.

The SNA forces captured the town just a day after the leader of Ahlu Sunna Waljama'a, Sheikh Mohamed Shakir, warned them against attacking his group in Guriel, saying the government will shoulder the responsibility for the consequences.

Somalia's army accused the ASWJ of planning to attack its troops, which the Sufi militia denied. In early October, the two groups clashed in Bohol village, 30 km north of Dhusamareb, which led to nearly a dozen dead on both sides.

The group leader Sheikh Shakir said that he was eager to resolve their differences through dialogue and welcomed peace talks, adding that his troops were there to fight Al-Shabaab.

"We are the ones who have been leading the country's security forces in the fight against terrorism. We want them to support us in the security of Galmudug," said Sheikh Shakir, the leader of Ahlu Sunna.

Galmadug witnessed fierce clashes between Somali National Army and ASWJ in 2020, forcing top leaders of the outfit to leave the city. It's not clear why the militia started fighting against the government after years of working closely together.

UN OCHA said more than 100,000 people have fled their houses in the town due to the conflict to nearby rural areas, where they are facing water shortages resulting from drought in the Galgadud region.