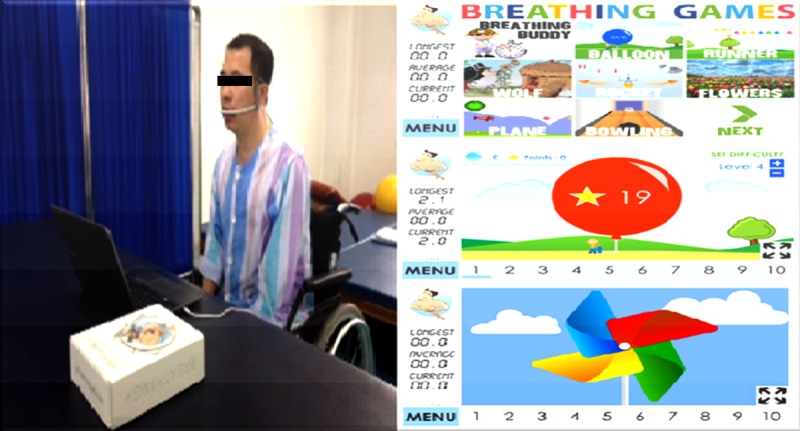 Thirty-eight in-patients with stroke (22 men, 16 women) were recruited for the study. Participants were randomly allocated into 2 groups: patients assigned to the GBE group (n=19), and the control group (n=19). The GBE group participated in a GBE program for 25 minutes a day, 3 days a week, during a 5 week period. For the same period, both groups participated in a conventional stroke rehabilitation program. Forced vital capacity (FVC), forced expiratory volume at 1 second (FEV1), FEV1/FVC, and maximum voluntary ventilation (MVV) were measured by a spirometer in pre- and post-testing.

The GBE group had significantly improved FVC, FEV1, and MVV values compared with the control group (p<0.05), although there was no significant difference in FEV1/FVC value between groups. Significant short-term effects of the GBE program on pulmonary function in stroke patients were recorded in this study.

These findings gave some indications that it may be feasible to include GBE in rehabilitation interventions with this population.

All individuals with a diagnosis of stroke admitted to an inpatient rehabilitation ward at the ‘B’ rehabilitation hospital (Gyeonggi Province, South Korea) were eligible after meeting the following inclusion criteria: (1) history of a stroke at least 6 months before the study; (2) able to understand and follow simple verbal instructions; (3) a Mini-mental State Examination-Korean (MMSE-K) score of >24 [21]; (4) no facial palsy and unrestricted movement of the lips; (5) a forced expiratory volume in one second (FEV1) under 93% of the predicted normal value [22]; (6) no orthopedic, neurologic, or unstable cardiac conditions; (7) no receptive aphasia and no history of thoracic or abdominal surgery; and (8) voluntary participation and the ability to communicate effectively. Exclusion criteria were as follows: (1) history of cardiac and/or chronic pulmonary disease; (2) clinical signs of cardiac and/or pulmonary disease; (3) presence of a severe visual disability and visual field defects; (4) inability to perform the tests; and (5) use of medications that could cause dizziness; (6) The participants receiving any cardiopulmonary fitness training that could have affected the study. Thirty eight participants were enrolled in the trial. Two research assistants and a physical therapist who worked in the rehabilitation hospital participated in the intervention and measurement session. All protocols and procedures were approved by the Institutional Review Board of Sahmyook University, and all subjects signed a statement of informed consent.

This study designed as a randomized, controlled trial. After pretesting, 38 participants were randomized to an experimental (n=19) and control group (n=19). The randomization process was performed using random allocation software [23]. The experimental and control groups both participated in conventional stroke rehabilitation program, but only the experimental group participated in game-based breathing exercise (Figure 1). Conventional stroke rehabilitation program consisted of joint mobility, eccentric contraction, muscle strengthening and walking exercise for 30 minutes once a day, 5 days a week, over 5 weeks [24].

An external file that holds a picture, illustration, etc.

The breathing trainer (Breathing+ package, Breathing Labs, Slovenia) was provided for this study. It consists of a game application that was downloaded to a laptop as well as a headset. Once the game application is started, the sensor in the headset recognizes the patient’s respiration, which initiates the game, depending on the respiratory pressure and the rhythm of the respiratory cycle. This game application includes 14 different games including blowing a balloon, flying a kite, an airplane, and a windmill, etc. Each game has a total of 10 sets and provides the inhalation period, the longest exhalation period, and their average value in real time. The patients’ game preferences were taken into consideration, and the patients were allowed to select a specific screen of their choice. To avoid falls, the games were played with the patients seated in an armchair (although not leaning on the back of the chair). In the event that patients felt dizzy or seemed to lose control, a break time was given until normal rhythm and control was regained. The research assistants provided the patients with the instructions, and encouraged the patient to perform the tests, and also demonstrated the game and monitored the patients from the beginning till the end of the game. For a more effective breathing exercise, patients were asked to perform longer exhalations, and the game scores were recorded. Visual feedback of the score motivated the patients to increase their training load. The total duration of the game-based breathing exercises was 25 minutes; breathing control exercise for relaxation was performed for 5 minutes at the beginning and end of this period.

Patients in the GBE group received 25 minutes of daily game-based breathing exercises, 3 days/week for 5 weeks. During the training period, all patients of both groups participated in a daily conventional rehabilitation program consisting of mat exercises and balance and gait training, for 30 minutes, 5 days/week, conducted by physical therapists employed at the hospital. After 5 weeks of training, all participants underwent the same pulmonary function tests with a spirometer, the same as at the start of the study.

A spirometer (SP-1, Schiller, USA) was used for the measurement of pulmonary function. The variables tested were FVC, FEV1, and FEV1/FVC. FVC is a pivotal indicator of restrictive ventilation disorder. Generally, the patient is asked to take the deepest breath they can, and then exhale into the sensor as hard as possible, for as long as possible, preferably at least 6 seconds. During the test, soft nose clips may be used to prevent air escaping through the nose. The test is repeated 3 times to record their average measures. FEV1 is defined as the maximum exhaling capacity measured in 1 second; it is the most useful indicator because it requires willingness of the patient. In an obstructive disorder, the respiratory tract closes faster than normal and the corresponding FEV1 decreases markedly. However, as FVC also might be decreased in an obstructive disorder, we need to analyze and compare the ratio of FEV1 to FVC. Generally, when the ratio is > 70%, it is regarded as restrictive, while it is considered as obstructive if it is <70%. MVV is widely known as the functional variable for the pulmonary function test. It is a measure of the maximum amount of air that can be inhaled and exhaled within 1 minute. For the comfort of the patient, this is done over a 15-second time period before being extrapolated to a value for 1 minute expressed as liters/minute. The test is useful in diagnosing respiratory disorders caused by other neurological diseases or musculoskeletal disorders.

All statistical analyses were performed using SPSS version 19.0 statistical software for Window (SPSS Inc., Chicago, IL, USA). Results are presented as mean ± standard deviation. Prior to training, the normality of the data was assessed with the 1-sample Shapiro-Wilk test.

No significant differences existed in baseline values between the general characteristics or dependent variables of the 2 groups (Tables 1, ​,22)

This study demonstrated that a 5-week program of game-based breathing exercise improves pulmonary function in stroke patients, and was associated with an increase in lung volume and respiratory muscle strength.

MVV is a reflection of the global integrity of the respiratory system as a whole. Thus, MVV decreases with loss of coordination of the respiratory muscles, deformity of the thoracic bellow, neurologic diseases, deconditioning, and ventilatory defects [25]. Generally, resistance muscle training has been used to improve muscle function and the strength of respiratory muscles. Sutbeyaz et al. (2010) found that RMT program had a significant effect on MVV (60.27 L/min to 65.93 L/min) in patients with sub-acute stroke [26]. Britto et al. (2011) found significant effects of an RMT program for inspiratory strength and endurance in chronic stroke survivor [27]. In the present study, game-based breathing exercise significantly improved MVV (51.36 L/min to 66.56 L/min) in the GBE group. The significant increase in MVV in this study suggests that hyperventilation to increase the score during GBE might activate and strengthen the respiratory muscles of stroke patients. Therefore, GBE may be a feasible way to improve respiratory muscle strengthening such as by RMT.

It has been found that lower levels of FVC and FEV1 are associated with an increased risk of stroke in those already at a high risk [28]. Our study showed that the values of FVC and FEV1 (2.50 to 3.15 L, 1.90 to 2.43 L in the experimental group, respectively) were improved by game-based breathing exercise in stroke patients. The greatest increases occurred in FVC and FEV1 (p<0.05).

These important observations suggest that game-based breathing exercise might be able to improve dyspnea, exercise performance, and quality of life. Furthermore, stroke recurrence rate, stroke mortality, and risk of various forms of respiratory muscle weakness may be reduced.

Most of the trained patients reported subjective improvement in aspiration problems during daily activities after the training period. Aspiration can develop into pneumonia, which in turn can lead to a worsening of the patient’s condition. Recent studies in patients with respiratory diseases suggest that the magnitude of experienced aspiration is at least partly related to the work performed by the inspiration muscles and their strength [4,5]. Therefore, it is not surprising that we observed improvement in the reported aspiration following the training period in the GBE group.

In this study, spirometry was used to assess pulmonary function in all participants. Pulmonary function tests are volitional tasks that require maximum effort from the participant. Hence, they are likely to be influenced by the participant’s motivation, condition, and alertness, as well as their ability to make an airtight seal around the mouthpiece of the measuring device. While our results showed that all participants experienced an increase in lung volume, the long-term effects of game-based breathing exercise in our patients were not monitored. A consensus has been reached regarding the lower effectiveness of exercise programs shorter than 6–8 weeks [30,31]. Therefore, we suggest that the long-term effect of game-based breathing exercise in stroke patients should be determined.

Further research is necessary to conduct a controlled clinical investigation designed to validate the effectiveness of game-based breathing exercise as a tool in rehabilitation. These future studies should focus on: (1) motivating the participants and achieving a greater extent of performance; (2) providing an increased selection of games, which is an important factor in keeping the users motivated and interested; and (3) providing training with a portable device.