Posted by: admin Categories: Stress and anxiety
Comments Off on ‘I feel like my smartphone is a better mother than I can ever be’

Back in the good old days, you only had your mother, your mother-in-law and Mrs Coughlan from across the road second-guessing your parenting efforts. Now there is an entire online community waiting to pounce on your every misstep.

As we all know, there is such a thing as too much of a good thing, and when it comes to mothering in the Millennial age, there is simply too much of everything: knowledge, studies being shared on Facebook, screen time, motherhood memes, expectations, unsolicited advice, acronyms on BabyCentre, awareness weeks, books you have to read, sleep training you have to try, and way, way, way too many people feeling impossibly blessed on social media.

It’s so funny that so many of the inventions to ease modern life have rapidly become our greatest source of angst. Take the torment that is the baby mattress monitor. Designed to alert parents to a change in their baby’s breathing pattern, the mattress monitor comes with a bonus function of driving you out of your exhaustion-addled mind with anxiety.

“Designed to alert parents to a change in their baby’s breathing pattern, the mattress monitor comes with a bonus function of driving you out of your exhaustion-addled mind with anxiety.”

Overall, there’s a terrifying number of gadgets to befuddle a Millennial mother. The pram comes with a coffee cup holder attachment. Do I need a coffee cup holder attachment? Should I even be drinking coffee while breastfeeding? I read a study on Facebook that said it was verboten, but then I scrolled down a bit and found another completely contradictory study on there encouraging me to drink coffee. And, if I am supposed to be drinking coffee, should I then be suspending said hot coffee above the baby as it lies in the pram?

And with all the advances we’ve achieved at this stage, does a Millennial baby not come already equipped with a coffee cup holder attachment?

My smartphone tells me hourly what to be doing with the baby, and this is all convenient and everything, but sometimes I can’t help but feel like my smartphone is a better mother than I can ever be. Every time I receive that email from BabyCentre, I feel a pang of failure.

“Your baby is now 17 months” reads the subject box. Is he? I am no longer able to keep track of his age in days, weeks and months. I’ve been saying that he’s a year-and-a-half since BabyCentre told me he was 13 months.

My mother musters genuine pity for me (not a common occurrence, let me tell you) as I grapple with the Wonder Weeks App.

“What is it?” she asks. “It’s just this app that tells me that my life is going to be a total sh*tshow on any given week.”

“We genuinely had it easier in my day, I think,” she sighs.

Frankly, she’s not wrong. There’s just a hell of a lot of pressure now. Up until the 1960s, the notion of “childhood” was barely a thing, never mind a thing that needed to be cherished and preserved and made into an unforgettable magical experience. Not to mention then recorded and published on the internet to prove to total strangers that you’re doing it right.

“In the good old days, you only had your mother, your mother-in-law and Mrs Coughlan from across the road second-guessing your parenting efforts.”

Back then, the benchmark for a good childhood was something along the lines of Angela’s Ashes. As long as you were doing better than Frank McCourt et al, you were doing alright.

They seemed to favour a style of parenting that was more baby-less than baby-led. My grandmother, by all accounts, would often be in one room and the baby would be in another, most likely being tended to by one of her other seven children.

Don’t get me wrong, I’m an enthusiastic proponent of baby-led  parenting (though sometimes when I’m complying with their exacting, tyrannical demands, I feel more like a baby-groveller) but when I’m very, very tired, the laid-back, let-them-roam-wild-and-free, 1950s approach looks appealing, though of course, not practical for these treacherous times. I think one of the main differences for parents now is the sheer scope for comparison on social media.

In the good old days, you only had your mother, your mother-in-law and Mrs Coughlan from across the road second-guessing your parenting efforts. Now there is an entire online community of “perfect parents” out there waiting to pounce on your every misstep.

Now, people pass comment wherever you happen to bring your offspring, so much so it often seems that just taking your child into the public domain is basically akin to strolling around wearing a sandwich board proclaiming, “All judgment welcome! Please feel free to vocally deride my every parenting effort.”

“Now we have a constantly scrolling carousel of other people’s children frolicking and playing and generally having a much better childhood than our own.”

If they can’t accost you in the streets, there’s always online, where open letters to mums who may need a public scolding appear with irritating frequency. Think articles entitled “Dear mum running into the shop and leaving your baby in the car” or “Dear mum on her iPhone”.

My granny and her friends, according to my mother and aunt at least, didn’t pay much heed to their own children, never mind what others were doing with their offspring. Now we have a constantly scrolling carousel of other people’s children frolicking and playing and generally having a much better childhood than our own.

Not to mention the endless studies being released berating us for excessive screen time (ours and our children’s), a dearth of outdoor play and us leaving our reproduction too late. Thank you, science!

The one upside to parenting in our always-on age of tech advances is… drumroll… earbuds. When the pressure to be the perfect Millennial mother is getting to be too much, just discreetly insert these babies into your ears and listen to an audiobook or podcast to drown out the children’s whinging and society’s judgment. 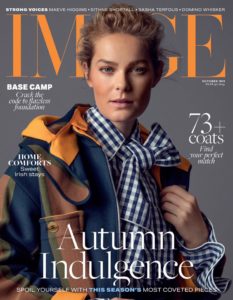 This article was originally published in the October 2019 issue of IMAGE Magazine.