Posted by: admin Categories: Stress and anxiety
Comments Off on Anxious about the return to ‘normal’? Here are five tips to help post-pandemic anxiety | Connect FM | Local News Radio 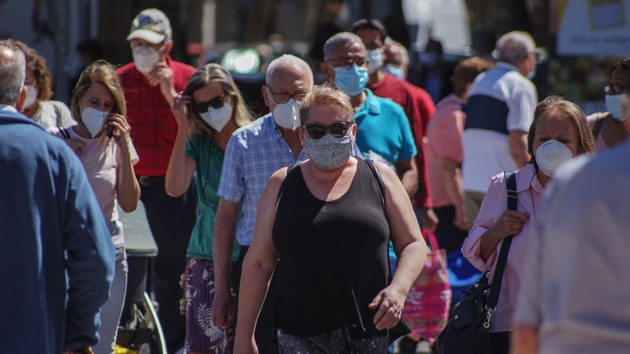 (NEW YORK) — Jamie Manning says she was excited earlier this month for a day of solo shopping in small towns outside her hometown of Washington, D.C.

It was something she would do frequently before the coronavirus pandemic, but this particular Saturday marked the first time she had done something like this in over one year.

As she sat down for lunch alone at a local restaurant and waited for her food, Manning said “my mind started to wander and I began to spiral.”

Describing the thoughts that raced through her mind, Manning, 32, explained: “There are a lot of people here. It’s really loud. I feel a little woozy. I hope my food gets here soon. I probably just need to eat something. I feel like I need to get out of here. I can’t leave because I need to eat. What if I pass out? I don’t know anyone here. DC feels so far away. Why did I come here alone? I can’t catch my breath.”

The panic attack Manning experienced was not one she expected. But as she recovered and thought about it later, she realized it was due simply to trying to reenter the world after more than a year spent socially distanced and isolated from people during the pandemic.

“I kind of felt sensory overload,” Manning told Good Morning America. “It wasn’t that I was as nervous about getting sick, it was more like, ‘Wow, I haven’t been in an environment for a very long time and it’s a lot to take in."”

Manning shared her experience in a post on Instagram and received dozens of replies from people describing similar experiences.

“It used to be really normal for me, so I was surprised I had the reaction that I did, and I was surprised by the amount of messages I got,” said Manning. “Anything we can do to normalize these feelings and help people feel like they’re not alone is important.”

The struggle some people have faced as the country has reopened over the past several months is to be expected, according to Divya Robin, a New York City-based psychotherapist.

“For the last year to year-and-a-half we’ve been repeatedly told to stay home, wear a mask, social distance,” said Robin. “That’s been the message that’s completely wired in our brain. We were almost trained to be fearful of seeing people, fearful of the virus.”

“Now we have to give our brain time to adapt again, to shift again what we’re doing,” she said. “We have to think back to March, and the time it took then.”

The increased anxiety felt by many people mostly stems from the uncertainty and lack of control around the pandemic, according to Robin.

Those feelings may be even more intense now as the United States faces a COVID-19 summer surge as the delta variant spreads.

“We all have a fear system in our brains and that’s where anxiety stems from,” she explained. “We’re used to day-to-day there being a few times that it’s activated, like if you’re walking on the street and a car comes near you.”

“Over the past year of the pandemic and what’s going on now with the uncertainty around new variants coming and cases rising, it’s been activated nearly constantly,” Robin added. “That’s one of the reasons anxiety has shown up for more people.”

Anxiety can show up in different ways for different people, from overwhelming and worrisome thoughts to physical symptoms like chest tightness, fatigue, brain fog and difficulty concentrating and focusing, according to Robin.

Here are five tips from Robin to help handle anxiety in a post-pandemic world.

1. Be patient with yourself:

Robin says to think of preparing yourself for a return to the office and social events in the same way you would think about getting back in shape after time away from the gym. In other words, patience.

“Two or three years ago, we’d be able to go three or four happy hours a night, and now many of us don’t have the energy,” she said. “It’s like if you go to the gym every day and run five miles and lift weights and then you don’t do it for a year-and-a-half, it’s hard to do.”

“But with time and training, it comes back,” added Robin.

In order to train yourself to essentially be social again, Robin suggests setting small goals, like a new activity each weekend, or meeting a different friend weekly for coffee, for example.

“Don’t feel like you need to totally jump into things,” said Robin. “Start small and build your way up, just like any training program.”

Manning said she learned that lesson the hard way now looking back on her own experience.

“One of the learnings I took is I tried to do much at once,” she said. “It was easy to be like, ‘OK, great, everything is normal again,’ but I had to acknowledge that it was a lot for me to do a whole day outing and to be more intentional and ease into it.”

3. Try not to compare yourself to others:

Every person has a different perspective on and approach to post-pandemic life, so don’t compare yourself to others, recommended Robin.

“Be real with yourself about what your limits are instead of comparing yourself to other people,” she said. “Really resist the urge to compare, especially because that can cause more anxiety.”

“Instead, think about what feels right for you.”

If you feel yourself having anxiety thoughts or physical symptoms of an anxiety attack, Robin recommends practicing grounding and deep breathing techniques.

“Think about where you are in the moment,” said Robin. “If you’re sitting with a friend, feeling the sensation of your feet on the ground, your back leaning on the chair. Feeling grounded in where you are.”

“And for deep breathing, focus on really feeling your belly as you inhale. You want to feel like a balloon is being inflated inside your stomach.”

5. Pay attention to your thoughts:

Noticing the thoughts that you’re having can help you to not give into your anxious patterns, according to Robin.

“Anxiety a lot of the time stems from thinking of things that are outside our control,” she said. “Notice when those [anxious] thoughts come up and be aware of them, but don’t ruminate. Try to stay with one thought instead of ruminating and running away with all the worst case scenarios.”

« How An Olympic Climber Uses Color Breathing To Get In The Zone
Postpartum anxiety is invisible, but common and treatable »