Posted by: admin Categories: ANXIETY MANAGEMENT
Comments Off on Rafael Nadal out 4-6 weeks with rib injury 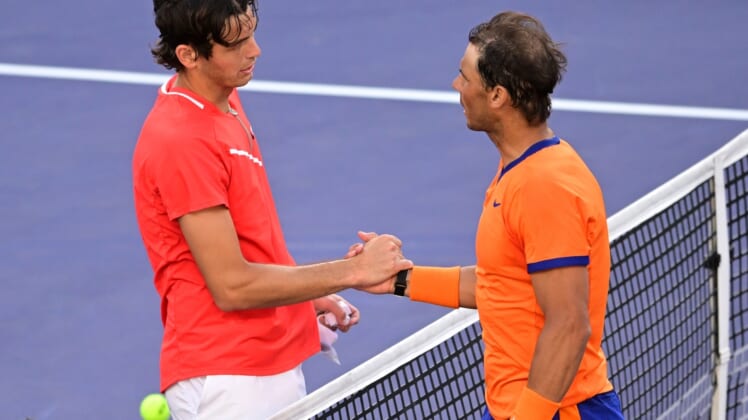 Rafael Nadal announced Tuesday that he’ll be sidelined four to six weeks with a stress fracture in his left rib.

Nadal took to Twitter on Tuesday to address his health to his fans.

“This is not good news and I didn’t expect it,” Nadal wrote in Spanish on Tuesday. “I’m devastated and sad because it comes after a great start to the season. I was coming to a very important part of the year with very good feelings and good results.

“I have always had that spirit of fighting and … I will … work hard (for) my recovery.”

Nadal, 35, won his record-setting 21st Grand Slam title at the Australian Open in January. He improved to 20-0 this season before Sunday’s loss.

Nadal was laboring during the match and took two medical timeouts — one following the first set and the other while trailing 5-4 in the second.

“I had pain, honestly. I had problems breathing. I don’t know if it’s something on the rib, I don’t know yet. When I’m breathing, when I’m moving it’s like a needle all the time inside here. I get dizzy a little bit because it’s painful,” Nadal said on Sunday. “It’s a kind of pain that limits me a lot. It’s not only about pain. I don’t feel very well because (it) affects my breathing.

“(It is) more than (being) sad for the loss, (that is) something that I accepted immediately, and even before the match ended. It’s more about that I am suffering a little bit, honestly.”

Nadal has won a record 13 titles at the French Open. This year’s event is scheduled to start on May 22.