Posted by: admin Categories: ANXIETY MANAGEMENT
Comments Off on How nearly ALL of the Earth’s population is breathing dangerously polluted air

Billions of people are breathing unhealthy air and could be at risk of heart and lung conditions, a major report warned today.

Ninety-nine per cent of the world's population live in areas which exceed the World Health Organization's (WHO) air quality guidelines.

The figure is higher than the 90 per cent figure from its report four years ago, but it has since tightened the limits for the amount of pollution nations should allow.

Air quality is poorest in WHO's Eastern Mediterranean and South East Asia regions, followed by Africa, it said.

Dr Maria Neira, WHO director for environment, climate change and health, said it is 'unacceptable' pollution is still killing millions every year and taking away 'countless' years of good health.

'Too many investments' are being made into 'a polluted environment rather than in clean, healthy air', she warned.

Countries are rushing to reduce their imports of Russian oil following its invasion of Ukraine. This has triggered concerns leaders will turn to fossil fuels — such as coal or liquified gas — to plug the gap in supply.

But WHO and United Nations leaders have warned the move is putting the climate at even more risk. 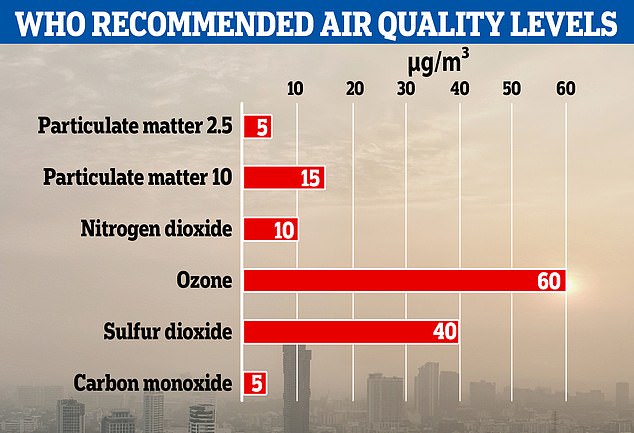 The graph shows the WHO's guidelines for particulate matter (PM 2.5 and PM 10), ozone (O3), nitrogen dioxide (NO2), sulfur dioxide (SO2) and carbon monoxide (CO). The health body warned 99 per cent of the world's population breathes air that exceeds these guidelines. The PM 2.5, PM 10 and NO2 figures are annual recommendations, while the O3 level is the maximum that people should be exposed to during the six months when concentrations are at their highest level. The SO2 and CO figures are 24-hour exposure maximums 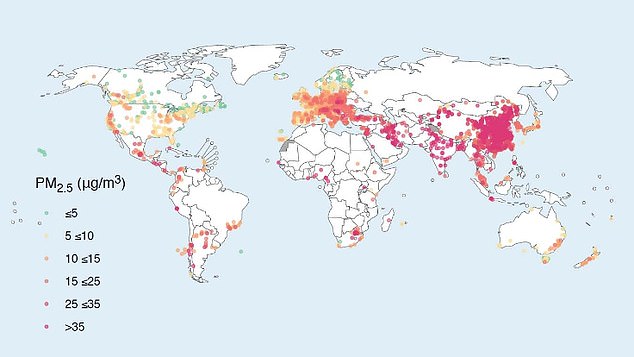 The map shows the regional particulate matter concentration equal to or smaller than 2.5 μm (PM2.5). The WHO guidelines set out that levels should be no higher than 5 µg/m³ per year (marked with green dots). Areas with concentration levels about this are marked in yellow, orange and red dots 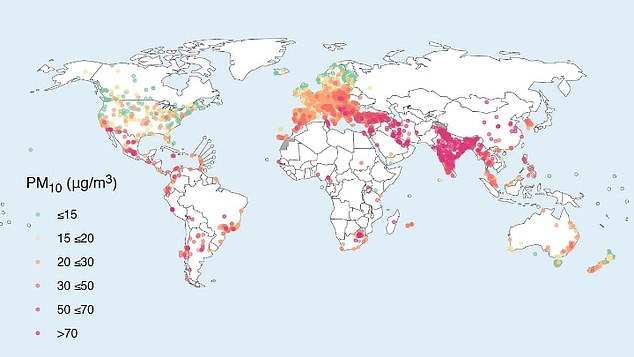 The map shows the regional particulate matter concentration equal to or smaller than 10 μm (PM10). The WHO guidelines set out that levels should be no higher than 15 µg/m³ per year (marked with green dots). Areas with concentration levels about this are marked in yellow, orange and red dots 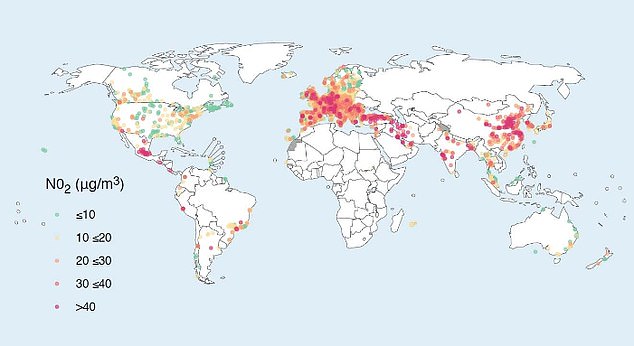 The map shows the regional nitrogen dioxide concentration. The WHO guidelines set out that levels should be no higher than 10 µg/m³ per year (marked with green dots). Areas with concentration levels about this are marked in yellow, orange and red dots

The WHO examined data from more than 6,000 cities in 117 countries, as part of an update to its air quality database update.

For the first time, the health body examined annual average concentrations of NO2 — which originates mainly from human-generated burning of fuel, such as through road traffic.

WHAT ACTIONS DOES THE WHO WANT COUNTRIES TO TAKE?

Steps governments can take to improve air quality and health, according to the WHO:

Tiny particulate matter are some of the most dangerous pollutants because they are capable of penetrating deep into the lungs and bloodstream. They have been linked with cardiovascular problems, strokes, respiratory conditions and cancer.

Meanwhile, NO2 has been found to trigger respiratory problems that can cause hospital and emergency department admissions, such as asthma and symptoms including coughing, wheezing and difficulty breathing.

Both dangerous pollutants are mainly made from burning fuel for transport, energy and agriculture.

WHO guidelines set out people shouldn't be exposed to levels of PM 2.5 higher than 5 µg/m³ on average per year, while levels of PM10 shouldn't top 15 µg/m³.

Concentrations of NO2 should not exceed 10 µg/m³.

But its report found air quality in 17 per cent of cities in high-income countries do not meet the standards.

And in low-income countries, fewer than one per cent of cities recorded levels in line with the guidelines.

But the WHO found NO2 levels were largely the same across the globe, regardless of how rich a nation was.

On average, 77 per cent of people in the 4,000 cities where NO2 data was collected are breathing in too much of the pollutant.

The WHO said its findings show billions of people are still breathing 'unhealthy' levels of PM and NO2, with those in the poorest countries being the worst affected.

It claimed the evidence base for the damage air pollution does to humans 'has been growing rapidly and points to significant harm caused by even low levels of many air pollutants.

The WHO said its findings show the importance of curbing fossil fuel use and taking action to reduce air pollution levels. 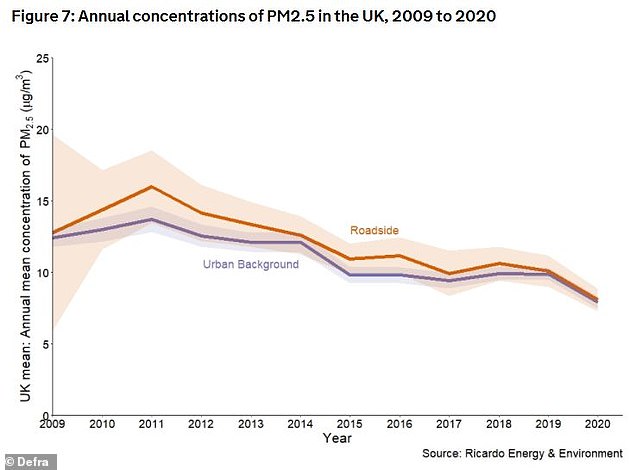 Three of the most problematic pollutants — nitrogen dioxide (NO2) and particulate matter (PM2.5 and PM10) — dropped to all-time low concentrations last year in the UK. Pictured, the level of PM2.5 since records began in 2009 for urban areas (purple) and by roads (red) 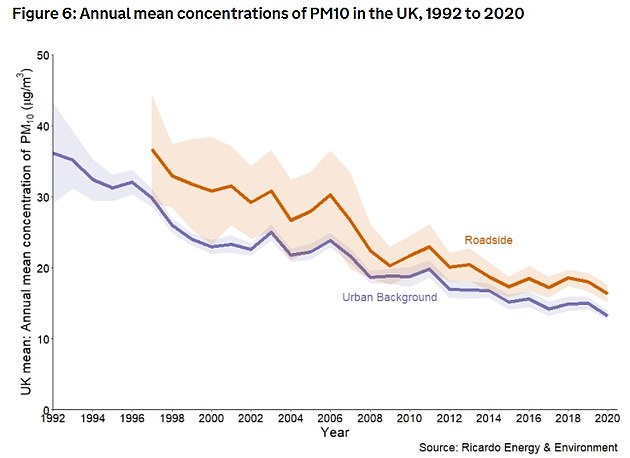 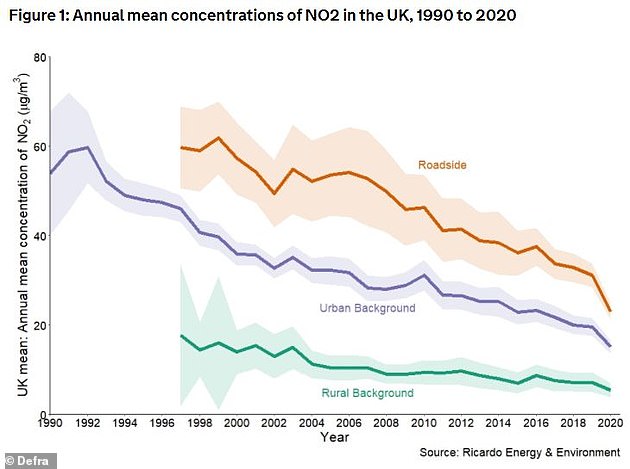 Pictured, a graph showing three measures of nitrogen dioxide, a pollutant primarily produced by engines and the burning of fossil fuels. The urban background annual average (purple) dropped by almost a quarter (23 per cent) in 2020

And the body also called for nations to identify sources of pollution, enforce stricter vehicle emission standards and checks and teach health professionals about the effects of air pollution.

'High fossil fuel prices, energy security, and the urgency of addressing the twin health challenges of air pollution and climate change, underscore the pressing need to move faster towards a world that is much less dependent on fossil fuels.'

Dr Neira added:  'After surviving a pandemic, it is unacceptable to still have 7million preventable deaths and countless preventable lost years of good health due to air pollution.

'That's what we're saying when we look at the mountain of air pollution data, evidence, and solutions available.

'Yet too many investments are still being sunk into a polluted environment rather than in clean, healthy air.'