When Naomi's 11-year-old daughter stopped breathing and turned blue after having a seizure, she hoped help would arrive within minutes.

Instead, her husband was told there were no ambulances available when he called triple-0.

After waiting 40 minutes and enlisting the help of her mum, a retired nurse, Naomi and her husband had to drive their daughter to hospital themselves.

She said the experience was not a reflection of the staff working within WA's health system, but a warning sign the system was crumbling under pressure.

When Naomi told her story to WA Premier Mark McGowan on ABC Radio Perth this morning, he promised to look into the situation.

"Obviously your 11-year-old daughter is the most precious thing in the world to you, so I'm very sorry that that occurred and it sounds like an awful situation," he said.

Mr McGowan went on to explain the extra money his government has tipped into the health system, and that 300 new beds had already been brought online.

But he did concede the system remains under significant strain because of the pandemic.

Last Wednesday, 2,259 WA health staff were furloughed either as a positive case or a close contact.

For ambulance staff, that figure fluctuates between 5 and 10 per cent of the workforce.

Mr McGowan also pointed to a jump in more non-emergency calls to triple-0, and the time it takes to implement COVID PPE protocols, as adding to the issues.

But after her harrowing experience, which she said left her other daughter "suffering terribly" as well, that was not what Naomi wanted to hear.

"I want to know what action is being taken to improve our healthcare system, because when you need emergency assistance and it's not available due to inadequate resourcing by the state government, it is the scariest moment of your life."

A government spokesperson told the ABC the Health Minister's office had contacted the family twice today, and that a follow-up appointment had been booked.

Over the last week, WA's COVID situation has remained relatively steady and with 8,145 new cases, the state still hasn't reached its expected peak.

The number of ICU patients with the virus has varied between six and seven, with the number of hospital patients overall rising from 208 last Wednesday to 242 today.

The number of reported active cases in the community has fallen after reaching a peak of 54,064 on Saturday, yet the health system is still struggling to keep up.

St John Ambulance aims to reach 90 per cent of its highest priority patients within 15 minutes of them calling.

Yesterday, they met that mark with only 71.4 per cent of calls. On Friday it was 54 per cent.

The rates are even lower for priority two and three calls.

The organisation's chief executive, Michelle Fyfe, said ambulance ramping was a key reason for those figures.

"On Friday afternoon I had 30 ambulances ramped at hospitals," she told ABC Radio Perth.

"What you're talking about is a system under pressure, and we are just a visible part of that system."

After reaching record levels in August last year, the time ambulances spent waiting outside hospitals to transfer patients had declined.

But since February those figures have been climbing. Last month, ambulances spent an average of 182 hours a day ramped outside hospitals.

So far this month, the average is even higher at 190 hours a day.

"This is not a dig at my emergency department colleagues either, because they are under pressure as well," Ms Fyfe said.

"But if our staff, that precious resource that we need out in the community, are waiting to hand off patients and that's taking longer, then I can't get them back out into the community.

"Once we get to the threshold of the hospital, we no longer have any control."

She said staff were doing everything they could to get to the highest priority calls as soon as possible.

Ms Fyfe also committed to look into Naomi's case, saying it was "harrowing to listen to".

But she said the state, and her ambulance service, were in the middle of a situation unlike anything in history, and they were doing their best to manage ramping, an increase in calls and staff furlough.

That included changing the makeup of crews, so that rather than a more experienced ambulance paramedic being sent out with an ambulance officer, less urgent and less serious patients were being treated by two ambulance officers.

The key difference, Ms Fyfe explained, was the experience of the staff. Both have graduated from university with paramedicine degrees.

But Health Minister Amber-Jade Sanderson today said she would rather the service utilise critical worker protocols, which allow close contacts back to work in some situations, rather than making that change.

"It would be my expectation that St John Ambulance is in lock-step with the public health system and that they're accessing that critical worker plan before they changed any mix of staffing within their ambulance service," she said.

"It's incredibly important that we maintain access to a quality ambulance service during this time."

Ms Fyfe said those rules were being looked at but that currently, staff forced into isolation are asked to stay away from work.

"We have to remember that these are people that we are sending into people's homes, so we have to be very careful about what rules we apply to them and when we bring them back to work," she said.

Opposition health spokesperson Libby Mettam said it was clear the strain was a result of underinvestment in health by the state government for an extended period.

"These pressures are largely a result of a health system which was already at capacity going into COVID," she said.

"The McGowan government have wasted two years to properly prepare our health system; they promised that the health system would be battle-ready for COVID.

"While they have supported COVID patients, they have not supported WA patients and the overall healthy running of our hospital system, which is leading to ambulances waiting extraordinary amounts of time, hours on end, outside our emergency departments." 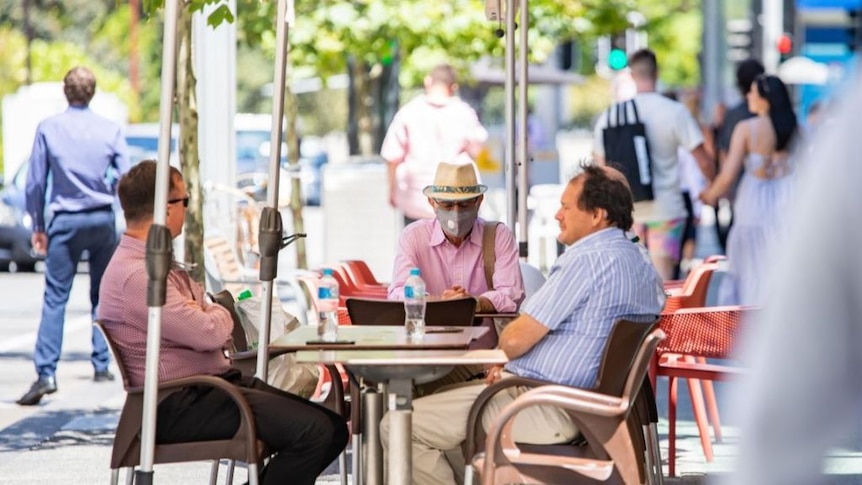 Relaxed COVID-19 rules are now in force in Western Australia

What you need to know about coronavirus: