If you suffer with hay fever you might be breathing WRONG, says expert

Posted by: admin Categories: PULMONARY DISEASES
Comments Off on If you suffer with hay fever you might be breathing WRONG, says expert

HAY fever season is upon us, with spring triggering the first pollen bomb.

Experts have warned that if you suffer the condition, your breathing may worsening symptoms.

Keep breathing through your nose if you have hay fever, an expert has warnedCredit: Getty

Anna Murphy, a consultant respiratory pharmacist at University of Leicester who specialises in asthma and allergies, said: “A lot of people will breathe through their mouth when they are struggling.

"But that bypasses our own natural filtering system.

“It is really important to breathe through the nose because that filters and prevents a lot of the pollen from causing issues within the body.”

Breathing through your nose may seem difficult when it’s runny, or you are sneezing. 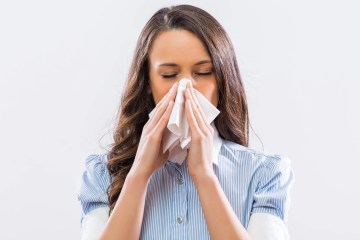 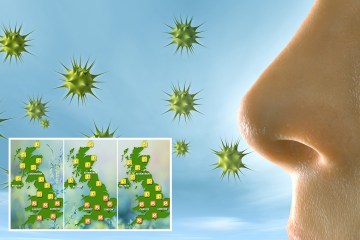 Decongestant nasal sprays are found in local supermarkets and pharmacies.

But steroid nasal sprays are best, RPS says, because they can reduce inflammation in the nose and won’t become ineffective with repeated use.

Some steroid nasal sprays are available to buy from pharmacies while others are only available on prescription.

Steroid nasal sprays take time to build up a barrier, so it is important to use regularly.

If you have summer hay fever, it is recommended to start using steroid nasal sprays before symptoms start, by around two weeks.

It is important to use a nasal spray correctly, spraying instead of sniffing.

You can view a video on proper nasal spray usage on the Asthma UK website.

Thorrun Govind, community pharmacist and Chair of the Royal Pharmaceutical Society Board in England, also suggests putting Vaseline around your nostrils to trap pollen.

Using petroleum jelly around the nostrils is an old-school remedy but works - it catches pollen before you inhale the particles.

Other tried and tested medications include eye drops.

Itchiness, redness and weeping are common for people with hay fever.

But the most common treatment for hay fever are tablets, such as Cetirizine or Loratadine.

Pharmacist Thorrun said: “Chlorpheniramine, which many people may know as 'Piriton' is another option, however it can cause drowsiness and doesn't have the same benefit of once a day dosing.”

Chlorpheniramine can only be purchased over the counter at a pharmacy, and it’s always important to check that it is compatible with other medications you may be taking.

One option is the hay fever injection, a dose of Kenalog which suppresses the body's immune response to histamines.

However, the intramuscular steroid found in Kenalog has side effects, including sleep problems, mood swings and headaches.

Anna, who does not recommend the jab, said: “Kenalog has been around for years.

"We have tried really hard to stop GPs prescribing it for hay fever because it has associated side effects with it.

"It is given as a one off injection but it’s like using a sledgehammer to hit a nut, really.

“I think people see it as an easy option, but the risk and the side effects of the intramuscular steroid cannot be ignored.”

You can also help your symptoms without medication.

It’s helpful to keep the home pollen free by vacuuming your house regularly, keeping the windows shut and dusting with a damp cloth.

If you do go outside - which, let’s face it, is impossible not to do when the sun is shining - make sure to take off and wash your clothes as soon as possible.