The LA Kings have announced a series of roster moves this afternoon, with a major impact on the team’s goaltending situation.

Additionally, the Kings have recalled defenseman Tobias Bjornfot from the taxi squad, which paves the way towards his return to the lineup this evening.

Today’s announcement puts some context behind Petersen not skating this morning. At first glance, with Jonathan Quick out, it looked like a chance to keep Petersen well-rested for what could have been an extended run as the number-one goaltender with the Kings. This obviously changes the equation.

The length of the absences for both Petersen and Quick, at this time, is unknown. Quick is currently considered day-to-day, and has not skated since Saturday’s game against St. Louis. Petersen’s timeline is unknown at this time, but he is unable to participate in any team practices or games as long as he is on the COVID-19 Protocol List.

With both goaltenders out in the here and now, opportunity beckons for Grosenick, who has two NHL games to his name, which came for Todd McLellan back in San Jose in the 2014-15 season.

Grosenick’s NHL debut was a terrific storyline. Stepping in during his second professional season, Grosenick turned in a 45-save shutout in a 2-0 victory over Carolina, as he set a modern-day NHL record for saves made in a shutout debut, becoming the 22nd goaltender to post a shutout in his NHL debut.

Lisa Dillman of The Athletic did a nice profile of Grosenick’s season, which has featured more maneuvering than most, as he returned to the Kings organization in early-February. After he originally signed a one-year contract with LA in the offseason, Grosenick was claimed off waivers by the Edmonton Oilers on January 16, only to be re-claimed by the Kings on February 6.

Grosenick has served as a backup for both the Kings and Oilers this season, including on Monday in Anaheim behind Petersen, but has yet to appear in a game with either team. He has played in two games with the Ontario Reign this season, with a 0-1-1 record in his first game action since March 2020.

Grosenick was an offseason guest of the once famous Reigny Day Podcast, when we dove deeper into his career, including his time in the AHL, that NHL debut with San Jose, and his goalie fight! A very candid conversation. Enjoy that below –

Joining Grosenick will be Matthew Villalta, the 21-year-old from Kingston, ONT. Villalta, a third-round selection in 2017, has 28 AHL games and eight ECHL games to his name, but tonight would be his first ever recall to the active roster.

Villalta earned rave reviews for his off-ice preparation and dedication, as well as his ability to learn from Petersen, during a rookie season where he served primarily as a backup until getting his shot later on. A cool, calm, composed goaltender, Villalta turned some heads in his first professional season. A look back at his rookie campaign here. 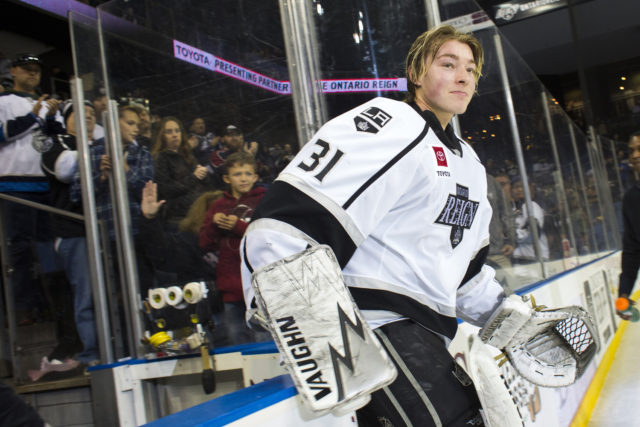 In additional roster moves, forwards Lias Anderson and Drake Rymsha, as well as defenseman Daniel Brickley were recalled from the AHL’s Ontario Reign to the taxi squad. Furthermore, forward Rasmus Kupari and defenseman Austin Strand were assigned to Ontario.

The Kings are just a few short hours away from a rematch against the Anaheim Ducks, tonight at Honda Center. Puck drops is 30 minutes earlier than usual, set for 6:30 PM.