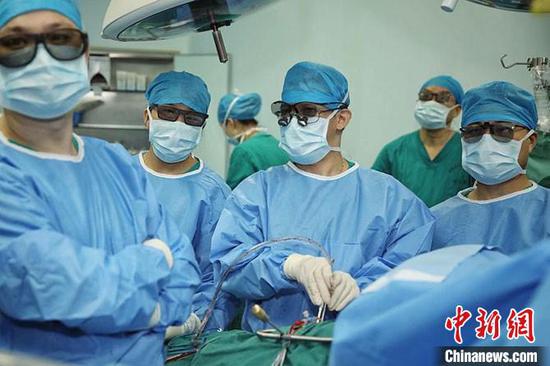 As a member of AATS, Guo is willing to deepen the exchanges between China and the rest of the world and to participate the top international industry conferences to broaden students’ horizons.

Guo said that there are many advanced technologies in the world so that close exchanges are necessary, and China can learn from them so as to independently develop more products and technologies.

“The combination of medicine and engineering technology is our important direction to forge ahead in the future. I’d like to devote myself to it and develop more innovative products and technologies by ourselves so as to promote the development of Chinese cardiac surgery,” said Guo Huiming.

About 800 totally endoscopic cardiac surgeries were conducted by the hospital’s minimally invasive cardiac surgery department every year, including valve repair and replacement, congenital heart defect correction, coronary artery bypass, etc. The main incision is only three to five centimeters long, which can reduce surgical trauma and speed up postoperative rehabilitation.

Founded in 1917, the AATS is a very prestigious academic organization in the field of thoracic and cardiac surgery in the world. Its year meeting has become the largest academic conference of thoracic and cardiac surgery with the most authoritative academic level in the world so far after a century’s development. It includes about 1,500 members from 46 countries, of which 20 experts are from China.