Why Mechanical Brain Pulsations During Sleep Are So Vital

Posted by: admin Categories: SPORTS & ATHLETICS
Comments Off on Why Mechanical Brain Pulsations During Sleep Are So Vital

We think of our brains as many things: the seat of the mind, the place where our memories live, or perhaps the world’s most powerful supercomputer, but you might be surprised to learn that our brains are also hydraulic pumps that mechanically throb, taking in blood and squeezing out Cerebrospinal Fluid (CSF), a clear fluid that encases and protects our brains and spinal cords from mechanical shock.

These complex brain pulsations are vital to brain health, because the outflow of CSF that they cause is the primary mechanism by which the brain clears itself of waste products, such as beta-amyloid and tau protein, excessive inter-cerebral quantities of which have been implicated in neurodegenerative maladies such as Alzheimer's disease and Parkinson's disease. Brain pulsations also “push” harmful bacteria, inflammatory proteins, and lactate waste safely out of the brain and into the CSF (and from the CSF into venous blood via arachnoid granulations in the meninges).

The role of sleep-induced brain pulsations in clearing brain waste

Although neuroscientists have known for some time that sleep plays an important role in clearing waste products from the brain (indeed, brain waste clearance is probably one of the main reasons we need sleep in the first place), the exact mechanism of this clearance of harmful “solutes” has been murky.

To better understand the role of sleep in brain pulsations and circulation of CSF, Heta Helakari and colleagues at the University of Oulu in Finland collected Magnetoencephalograms (MEG’s), EEG’s, fast Functional Magnetic Resonance (fMRI) images, along with heart rate, respiration, and brain blood pressure in healthy volunteers during both sleep and wakefulness cycles. The Finnish work, published last week in the Journal of Neuroscience, correlated brain neural activity (in EEG’s and MEG’s), heart rate, respiration, and brain blood pressure with changes in CSF volume (revealed by the neuroimaging studies).

And the results were remarkable, revealing for the first time a close relationship between rhythms in blood flow, brain waves, and CSF flow out of the brain.

In the images below, typical “disorganized/fast” (low amplitude) vs “organized/slow” (large amplitude) EEG patterns in REM and NREM sleep are shown, outlined in red, with the first, red trace below the EEG depicting eye movements (present in REM sleep, absent in NREM sleep) 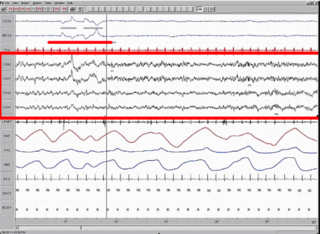 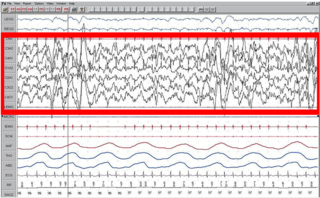 Based on these findings, the Finnish researchers conclude that sleep, especially NREM sleep, is vitally important to strong CSF flow and the associated flushing of waste products from the brain.

Bottom line: If you want your brain to keep pumping out useful ideas, keep it pumping out CSF with quality sleep every night.