Breathing in second-hand cannabis smoke from a bong exposes people to four times more toxic pollutants than those from a standard cigarette, a study has found.

The risks of second-hand cigarette smoking have been known for years, but this paper is thought to be one of the first to show marijuana fumes also pose a risk.

Researchers at the University of California, Berkeley monitored PM2.5 levels — a particle type that can worsen asthma and heart disease — in a room over the two hours bong smoking took place, and for two hours afterwards.

Patton Nguyen, a master's of public health student at the university and lead study author, warned that 'bong smoking was not safe'.

He said toxic fumes released from the devices could pose a risk to children, pregnant women and grandparents if they also inhaled them.

A total of 18 US states — including California, New York and Arizona — have already legalized the smoking of cannabis for recreational reasons, with 20 others having legalized it more medical purposes.

Pressure is also building on the federal government to legalize the drug recreationally. 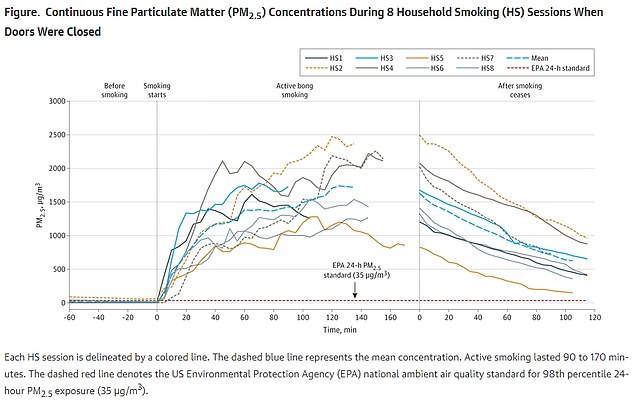 The above graph shows the PM2.5 levels in the air before, during and after smoking a bong during the eight sessions alongside the average (blue dotted line). The recommended levels from the Environmental Protection Agency are included (red dotted line) 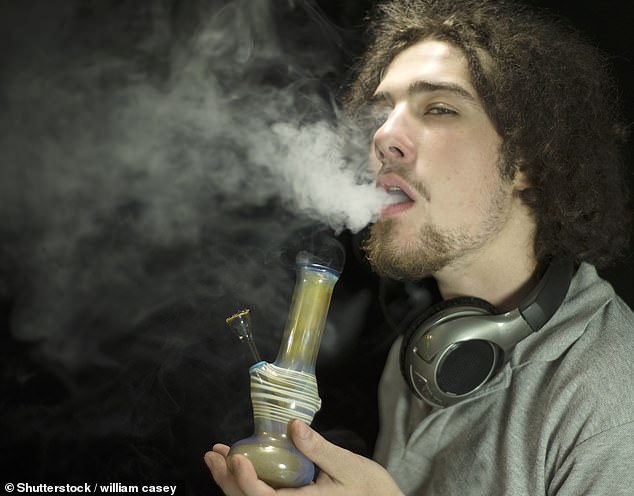 PM2.5 particles in the air can irritate the lining of the nose and throat, and raise the risk of asthma and heart problems studies suggest (file photo)

The Centers for Disease Control and Prevention (CDC) warns marijuana smoke contains many of the same toxic and cancer-causing chemicals as in cigarettes.

Previous studies showed the compound responsible for the marijuana 'high' can be passed to children and infants through second-hand smoking.

This could pose a risk to youngster's mental development, and trigger problems with attention, motivation and memory.

PM2.5 is a tiny piece of a solid or liquid that is suspended in the air.

It can include metals, microplastics, soils and chemicals.

PM2.5 is often emitted when substances are burned, such as fuel in a car or tobacco in a cigarette.

But it can also get into the air when particles on a surface are disturbed by sudden movements.

The particles can get into the eyes, ears, nose and throat — triggering irritation.

Studies have shown they can worsen asthma and heart conditions.

Researchers, who published their findings at the end of last month in JAMA Network Open, asked participants to sit in a room with the windows and doors closed and smoke a bong for about two hours.

An aerosol monitor — often used on sites where there is a risk of toxic gas exposure —  was then used to measure the levels of PM2.5.

They found during these periods PM2.5 levels rose to about 1,300 micrograms of gaseous pollutant per cubic meter of air (ug/m3).

This is about five times the recommended maximum level from the US Environmental Protection Agency (250ug/m3).

It was also four times that measured in rooms where people were smoking cigarettes, up to 330ug/m3.

The study did not look at PM2.5 levels after smoking cannabis as a joint.

In the Columbia study, PM2.5 levels were measured during a smoking session in rooms in the New York area.

PM2.5 is a minute particle that can be released from cars, planes, and from burning cigarettes and cannabis.

It can irritate the lining of the eyes, nose, throat and lungs, triggering coughing, sneezing and shortness of breath.

Previous studies have also linked higher levels of this pollutant to rising numbers of respiratory and cardiovascular hospitalizations.

Nguyen said: 'Second-hand cannabis smoking in the home can expose non-smokers to extremely high concentrations of fine particulate matter, as much as 10 times greater than the very unhealthy wildfire smoke the Bay Area experienced during the orange sky days of September 2020.

'The public should be aware of the potential concerns with second-hand cannabis smoke.

'Smokers should understand how smoking indoors can impact others and potentially expose children, pregnant women, the elderly, workers and non-smokers.

About seven in ten cannabis smokers in the US consume it through smoking, while one in 10 eat or smoke it through a bong respectively.

« Breathing Space campaign aims to get people back into great outdoors and exploring Highlands
Bhramari: The Benefits of Humming for Stress Relief »