What Are The Best Stocks To Invest In? 5 Gene Editing Stocks To Watch Now

Posted by: admin Categories: Genetics
Comments Off on What Are The Best Stocks To Invest In? 5 Gene Editing Stocks To Watch Now

Finding the best stocks to invest in 2021 is all about understanding the stock market trajectory. With the healthcare space undergoing a genomics revolution, gene editing stocks have been in focus. For those unfamiliar, gene-editing technology is used to insert, edit, or delete a gene from an organism’s genome. The technology may be able to play a part in treating medical conditions ranging from cancer to rare genetic conditions.

If you have been following the biotech space lately, chances are you have heard of the breakthrough from Intellia Therapeutics (NASDAQ: NTLA). There are clear signs that Intellia’s revolutionary gene-editing technology is beginning to show promise. While safely sending RNA strands through the bloodstream to instruct cells to carry out a specific task seemed challenging, Moderna (NASDAQ: MRNA) and BioNTech (NASDAQ: BNTX) showed the world that RNA-based drugs are a real possibility.

If anything, gene editing could potentially unlock the door to treating a wide array of other genetic diseases. Given how rapidly health care is advancing, it would be beneficial to keep tabs on the industry. That’s if you believe these companies are the next game-changers in the space. With so much going on in the biotech space, do you have a list of the best gene-editing stocks to watch in the stock market today?

Editas Medicine is a leading genome editing company that focuses on translating the potential of CRISPR gene editing to develop a robust pipeline of medicines. Currently, the company has an ocular focus, with a portfolio of gene-editing therapies aimed at eradicating inherited retinal disease, such as genetic blindness. The stock has risen by more than 40% since the beginning of June.

The bullishness came after a key announcement from the company about its phase 1/2 clinical study evaluating EDIT-101. Editas said that an Independent Data Monitoring Committee (IDMC) gave the green light to enroll children with rare genetic eye disorder in two of its studies. The IDMC endorsement is massive news for the company as it appears to confirm an encouraging safety profile for EDIT-101, the company’s lead pipeline candidate. Given that Editas is slated to report its initial data from its phase 1/2 study of EDIT-101 in September, would you be willing to take a chance on EDIT stock? 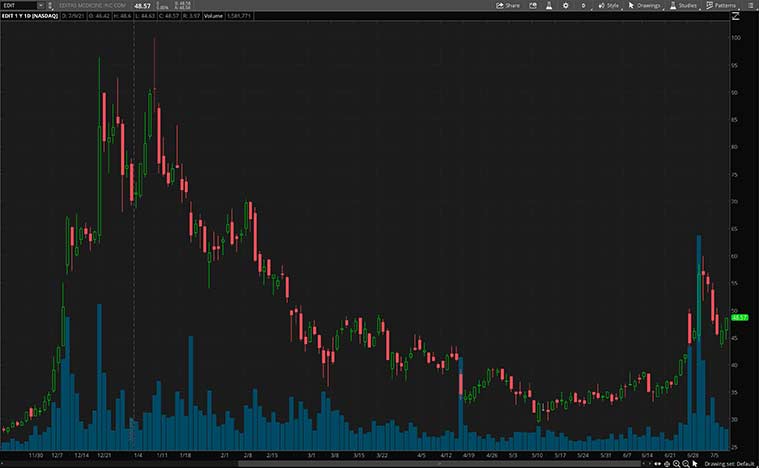 Crispr Therapeutics is the largest CRISPR biotech startup. The company already has four ongoing clinical trials in hemophilia and cancer. Crispr Therapeutics develops its products using Cas9 gene-editing platform, which allows for precise directed changes to genomic deoxyribonucleic acid (DNA). Apart from that, the company has also announced a strategic partnership with Capsida Biotherapeutics Inc. This could lead to the development of first-in-class gene therapies for patients with severe neurological disorders.

There was also a positive update regarding its partnership with Vertex Pharmaceuticals Inc (NASDAQ: VRTX) for the treatment of transfusion-dependent beta-thalassemia and severe sickle cell disease. The new data on 22 patients with a follow-up of at least 3 months, treated with the investigational CRISPR/Cas9-based gene-editing therapy, CTX001, shows a consistent and sustained response to treatment. This progress and momentum of CTX001 validate the role that CRISPR gene-editing tech could have in the future of therapeutics. Hence, would you consider CRSP stock to be a top gene-editing stock to buy now? 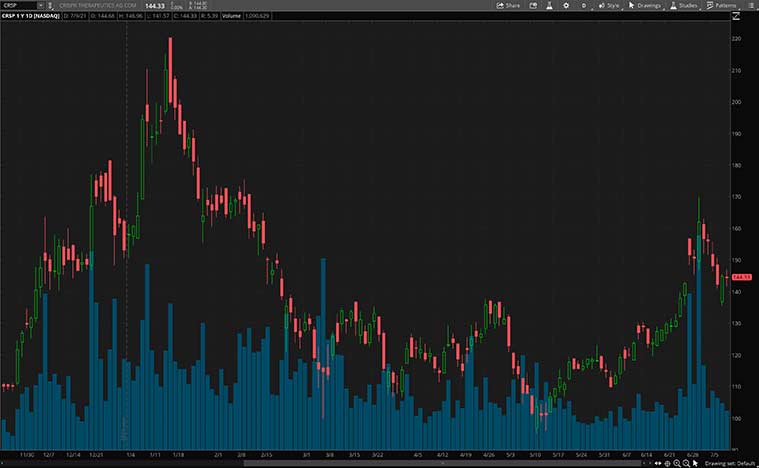 Illumina is a company specializing in cancer and complex disease genetic research. In fact, Illumina is a world leader in next-generation sequencing (NGS) technology. For one, ILMN stock is attractive because analysts expect the DNA sequencing market to grow significantly over the years. With NGS, researchers will be able to understand transmission routes, mutation rates, and vaccine development. Be it COVID-19 or cancer, this company is the key to understanding the genetic material of these diseases.

The DNA sequencing company also announced its first-quarter financial results on April 27. In it, revenue came in 27% higher year over year to $1.1 billion. More recently, ILMN stock received another boost after its Grail spinoff presented solid data from its liquid-biopsy test at the American Society of Clinical Oncology (ASCO) meeting. In short, the tests could revolutionize cancer treatment by catching the disease before any symptoms arise. Given its strong potential in cancer treatments and solid fundamentals, would you add ILMN stock to your watchlist? 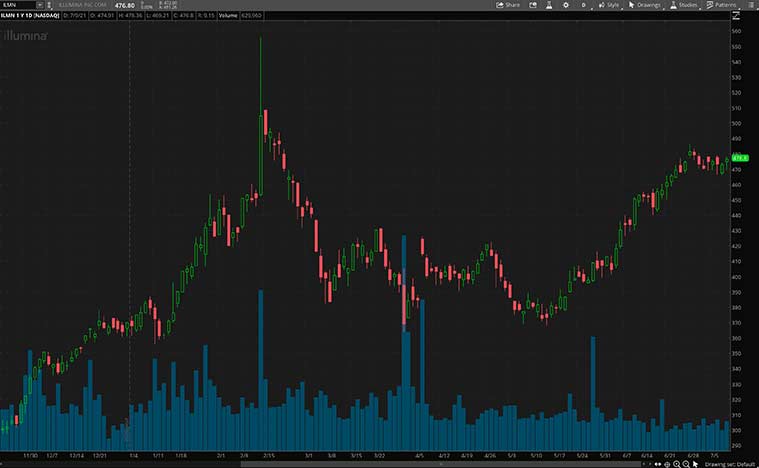 Another DNA sequencing stock worth noting is Pacific Biosciences of California (PacBio). The company’s key product is its Sequel system, a nucleic acid sequencing platform based on Single Molecule, Real-Time Sequencing (SMRT) technology. Unlike Illumina, which requires the cutting and reassembling of DNA, PacBio’s method, also known as long-read sequencing, uses lasers to read a sequence over and over again for accuracy. This would allow scientists and researchers to unlock some of the most puzzling diseases that lie in the missing genes.

The pandemic may have put pressure on the company’s sales in 2020, but PacBio’s first quarter signaled there are more rooms to grow ahead. Revenue came in 86% higher year-over-year to $29 million. As you may or may not know, the company also partners with the Centers for Disease Control and Prevention (CDC) to detect coronavirus variants by creating whole genomes. With PacBio’s transformative technology, it could provide highly accurate and uniform results in genetic sequencing. If you believe in PacBio’s potential to help us better understand the human genome, would you initiate a position in PACB stock today?

To sum up the list, we have Beam Therapeutics. It is a biotech company that focuses on precision genetic medicines based on its base editing technology. Base editors enable precise rewriting of a single letter of a gene. The company saw its stock price climb more than 60% in June. The bullish move came after Intellia Therapeutics announced its results from a phase 1 study. This could potentially create lifelong cures for serious diseases. For example, its most advanced preclinical candidate, BEAM-101, targets the treatment of rare blood diseases beta-thalassemia and sickle cell disease.

Earlier this month, the company announced that it could issue shares totaling up to $800 million. This is a big step from its $300 million cap of the previous agreement with Jefferies Group. That would strengthen Beam’s strong cash position and fund the company’s clinical development in the years to come. As some of you may be aware, the company does not have any programs in clinical testing, yet. The aforementioned candidate hopes to obtain U.S. Food and Drug Administration (FDA) approval later this year for early-stage clinical testing. The euphoria over gene editing milestones may have waned, but it doesn’t change the long-term potential of the space. Considering all these, would you consider BEAM stock a top gene-editing stock to buy? 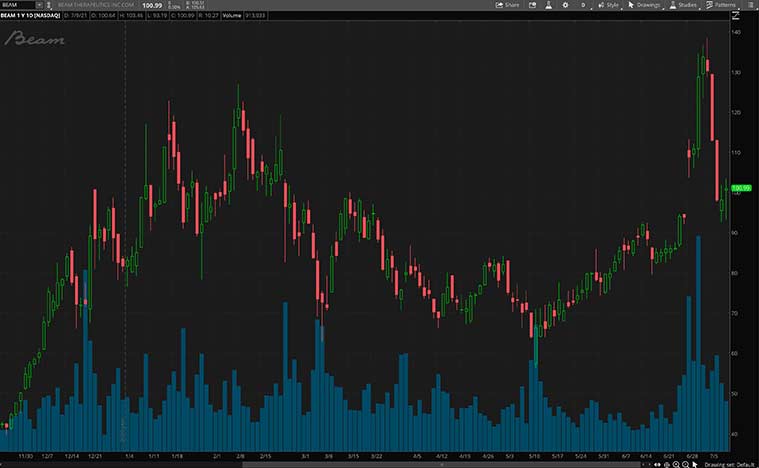