The Revolt Against Reality | Adam Lee

Posted by: admin Categories: Genetics
Comments Off on The Revolt Against Reality | Adam Lee 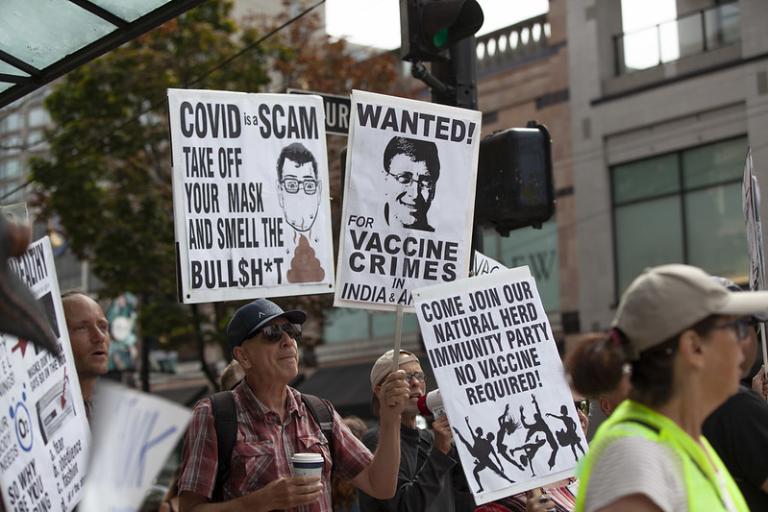 Just when victory over COVID-19 seemed in sight, the virus is staging a comeback.

Vaccination rates in the U.S. have slowed to a trickle, just in time for the more-contagious Delta variant to arrive. Now it’s surging all across the country, in what CDC director Rochelle Walensky called a “pandemic of the unvaccinated”.

All fifty states are seeing upticks, although the biggest hot spots are in undervaccinated red states like Florida, Louisiana, Arkansas and Missouri. Earlier this month in Springfield, MO, hospitals ran out of ventilators in an echo of the terrible early days of the pandemic.

As I’ve written before, the U.S. has plenty of shots for everyone. The problem is getting people to take them. Public health officials are being drowned out by a deluge of ludicrous and bizarre conspiracy theories:

The excuses range from the merely false to the absurd. The shots don’t work. They impair fertility. They’ll alter your DNA. They’ll magnetize you. They actually spread the virus.

… “Everything from Bill Gates putting a microchip in it — I’ve heard everything. It’s ridiculous,” said Tom Keller, chief executive officer of Ozarks Health Care in southern Missouri, a region with low vaccination rates that’s an epicenter of the U.S. delta outbreak.

“People are listening to social media instead of listening to their docs,” he said. “Somebody who has a million followers all of the sudden becomes the expert on not getting the vaccine.”

Conservative pundits and Republican elected officials are equally to blame. You’d think that fighting a deadly virus, which recognizes no political distinctions in who it infects, would be a bipartisan cause if anything is. They could be refuting these conspiracy theories and cracking down on superspreader events. Instead, they’re feeding the flames, amplifying misinformation and catering to reckless and irresponsible behavior. For example, in Missouri:

Republican Gov. Mike Parson tweeted a picture of himself at a fireworks celebration in the tourist town of Branson, a large crowd behind him. In the surrounding county, just 29.3% of residents have received at least one COVID-19 vaccine shot, state data shows.

…Parson last week urged people to get vaccinated. But he has consistently declined to enact restrictions to control the spread of the virus, instead asking residents to take “personal responsibility.” Missouri never had a mask mandate, and Parson signed a law last month placing limits on public health restrictions and barring governments from requiring proof of vaccination to use public facilities and transportation.

Tennessee went even farther. In a jaw-dropping story, Republican legislators fired the state health director for… doing too much to promote vaccination.

Fiscus alleged in her statement that the health department responded to the GOP outcry by “halting ALL vaccination outreach for children.”

“Not just Covid-19 vaccine outreach for teens, but ALL communications around vaccines of any kind,” Fiscus wrote.

The Tennessean reported Tuesday that all adolescent vaccine outreach, for all diseases, would be halted, according to emails and an internal report with state health department officials Friday and Monday.

It’s not just the U.S. where stupidity runs rampant. In Cyprus, a protest against vaccine mandates became a riot where cars were set ablaze and a TV station was ransacked. In Australia, anti-lockdown demonstrators clashed with police, including one man who was photographed punching a horse. In Paris, crowds rallied against vaccine passports, and in London, they stormed a shopping mall to demand “no more lockdowns”.

If the refuseniks were concerned about unforeseen side effects of the vaccine, and wanted to wait and watch out of an abundance of caution – and were willing to comply with public-health safeguards in the meantime – that would be one thing. But they’ve made it clear that they’re against both the vaccine and also masks and lockdowns. They want to live as if COVID-19 didn’t exist, even while thousands throughout the world are still getting sick and dying.

Classical libertarian philosophy is founded on the non-aggression principle, which says that my right to swing my fist ends where it meets your face. But the anti-vaxers yelling about “freedom” have a very different motivation. They’re driven by the pure selfish desire to do whatever they want, regardless of who they might harm by spreading a dangerous virus. It’s as if they wanted to walk down the street wildly swinging their fists at random, because “freedom” means the right to concuss as many strangers and break as many noses and jaws as they see fit.

This would be bad enough as an isolated movement, but the anti-vaxers are making common cause with other purveyors of dangerous woo. Specifically, they’re flocking to QAnon, and the affection is mutual:

In recent months, anti-vax influencers have appeared on multiple different QAnon shows, apparently noticing in QAnon supporters an audience primed to be receptive to their message.

…In late March, Andrew Wakefield — a disgraced anti-vaxxer who helped catalyze the anti-vaccination movement due to discredited work suggesting a link between vaccines and autism — appeared along with anti-vaxxer Lori Gregory on RedPill78, a QAnon show currently streaming on Twitch.

In both March and April, Tenpenny appeared on QAnon show BardsFM. She praised the show, saying it has a “massive audience” of “patriots” (and suggested she’s a member of the show’s audience), while host and QAnon supporter Scott Kesterson called Tenpenny a “brilliant mind,” a friend, a “powerful voice in the anti-vax movement,” and a “truth teller.”

Besides using the show to promote her content, Tenpenny pushed a wide variety of false claims about the supposed harms of the vaccines, such as calling them a “genocidal, DNA-manipulating, infertility-causing, dementia-causing machine.” She also called the vaccine makers “satanists” and “psychopaths,” indirectly invoked the Holocaust while criticizing Israel’s mass vaccination campaign, and agreed with Kesterson that the vaccines were somehow removing God from people.

…When Tenpenny was on Patriot Streetfighter, she claimed that people learned that “we are all fighting the same beast” when they saw the “election being stolen” via “Dominion super servers” (referring to a common but debunked conspiracy theory).

The convergence of anti-vaxxers and QAnon is an illustration of “crank magnetism” – the tendency of people who hold one bad belief to accumulate others. Once you’ve laid down your guard of critical thinking to let one kind of bullshit in, it leaves a wide-open path for others to come in.

However, I think the root cause goes deeper than that. It’s one thing to be tricked by lies because you lack a mental toolkit for detecting falsehood. But these QAnon anti-vax cultists have a more fundamental problem.

It’s not that they can’t tell the difference between truth and fiction; it’s that they reject the distinction between these categories entirely. What we’re seeing, in America and elsewhere, is a revolt against the very idea of objective reality. They refuse to accept that there are facts which exist regardless of what they wish or desire.

They wanted Donald Trump to be a great president, but he wasn’t, so they concocted an alternate reality in which he was secretly fighting a sinister cabal of child abusers. They didn’t want him to lose in 2020, but he did, so they spun conspiracies about how the election was stolen. Now they don’t want to wear masks or get shots, so they’re claiming that COVID isn’t real or isn’t serious, and they’re the only ones smart enough to see through the deception.

During the Trump years, this was their default response to any challenge to their worldview. They grew so accustomed to doing it, it’s become a habit – one they can’t break even now, when their adversary isn’t an opposing political party, but a force of nature that’s not susceptible to opinion polls. They’ve talked themselves into believing that they can bend reality to their will, if only they scream loudly enough. But the coronavirus isn’t impressed by such tactics, and for many of them, it’s going to end in tears.

Image: From the COVID-19 “Unmask Humanity” Protest in Vancouver, August 23rd, 2020. Via GoToVan, released under CC BY 2.0 license