Posted by: admin Categories: Genetics
Comments Off on Reads mapped on wrong strand

I'm working on Coli MG1655, after i have aligned the reads to reference, i checked in IGV if alignments are coherent to gene expression but i noticed that despite some genes are mapped on forward strand, the reads has been aligned to the reverse strand.

i used samtools to divide reads mapped on forward and reverse strand in this way:

I am attaching an example of groL gene, mapped to the forward strand, but reads actually mapped on reverse strand.
Why? what am i missing? 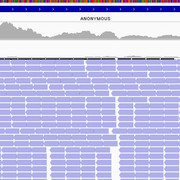