There's a lot of hype surrounding gene-editing technology, and considering its potential implications, that's no surprise. The ability to treat previously incurable genetic disorders could save the lives of hundreds of thousands, if not millions, of people around the world.

CRISPR Therapeutics (NASDAQ:CRSP) is one of the big players in this relatively young sector, having created a widely used genome-editing tool called CRISPR/Cas9. However, the excitement surrounding the gene-editing sector has taken a backseat to the ongoing COVID-19 pandemic. With markets around the world reporting significant losses as stock prices continue to fall over the past month, CRISPR's stock has followed suit.

Does that mean now's a good time to buy shares of this gene-editing biotech company? Let's find out. 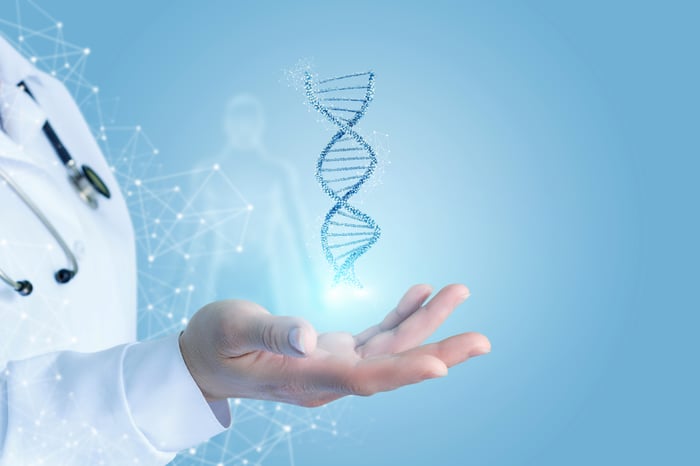 CRISPR Therapeutics has nine drug candidates in the works, although only a portion have begun early-stage clinical testing. The company's flagship treatment is CTX001, a drug that seeks to treat two rare blood disorders known as sickle cell disease and transfusion-dependent beta thalassemia (TBT).

Both conditions are disorders that affect the blood's ability to transport oxygen to tissues and organs. With no cures available for either disease, the best patients can do is try to manage the symptoms of the condition, which between the two diseases include pain, fatigue, slowed growth, yellow skin, and further complications. About 60,000 babies are born with TBT each year, while another 300,000 infants are born with sickle cell disease annually.

CTX001 is particularly exciting because it has already been successful in treating a couple of patients. In 2019, CRISPR provided its first clinical update for the drug, involving one patient diagnosed with sickle cell disease and another with TBT. After receiving the initial treatment and going through a several-month follow-up period, both patients saw a complete reversal of key symptoms associated with their respective conditions.

CTX001 first started a phase 1 trial back in late 2018 and is scheduled to finish in 2022. Considering late-stage trials need to be conducted as well, it wouldn't be surprising if CTX001 ends up applying for regulatory approval around 2024. CRISPR is expected to provide further clinical updates on CTX001 in 2020, so investors should keep their eyes out for when these new details are announced.

Besides CTX001, CRISPR's most promising treatments are CTX110, CTX120, and CTX130. Each of these three drugs is a type of cancer treatment called a chimeric antigen receptor T-cell (CAR-T) therapy. This makes for a potentially life-saving procedure for many cancer patients, as CAR-T therapies take a different approach than other treatments. CTX110 and CTX120 have recently begun phase 1 testing, while CTX130 is close to finishing preclinical development. While it's hard to say exactly when these drugs would be submitted for regulatory approval, investors and patients could possibly end up waiting as long as several years before these drugs are available for widespread use. .

In CAR-T therapies, a patient's immune cells (in this case, the T cells) are extracted and altered in a lab to become better at killing cancer cells. These T cells are then reintroduced back into the patient's body. While effective, the problem with these therapies is their cost. It can cost up to millions of dollars for a patient to receive this type of treatment, making it difficult to justify from a cost-effectiveness standpoint.

However, CRISPR's trio of CAR-T treatments could end up being less expensive than the millions of dollars charged for conventional CAR-T therapies being employed today. One example includes a CAR-T treatment developed by Novartis called Kymriah (tisagenlecleucel). In some cases, medical centers end up charging as much as $1.5 million per treatment of Kymriah in order to break even. According to some of the science done on this topic, CAR-T therapies that utilize gene-editing technology, such as CRISPR's, have the potential to be even more effective at fighting cancer cells while being cheaper to produce. This could give CRISPR's treatments a major advantage over any other CAR-T drugs on the market.

What about the competition?

CRISPR was one of the first gene-editing companies to emerge on the scene, but rivals have quickly sprung up as well. Editas Medicine, Intellia Therapeutics, and Sangamo Therapeutics are all potential competitors to CRISPR right now. However, these three companies are working on different diseases, so they aren't entirely in direct competition with one another.

Currently, CRISPR has three candidates in clinical trials. This is more than Editas and Intellia, which both only have one drug in early-stage trials, but fewer than Sangamo, which has five. All four companies are also developing a sickle cell disease or beta-thalassemia drug (or both), so there will definitely be some competition in this area. However, CRISPR's CAR-T therapies have a significant lead in terms of their clinical progress in comparison to other CAR-T treatments developed by gene-editing companies.

That by itself is a big deal, since the CAR-T market is expected to reach $8.3 billion by 2027. CRISPR could end up taking a big chunk of this market for itself if its three CAR-T drugs prove to be cheaper and more effective than current CAR-T therapies, something which seems very possible at this point. 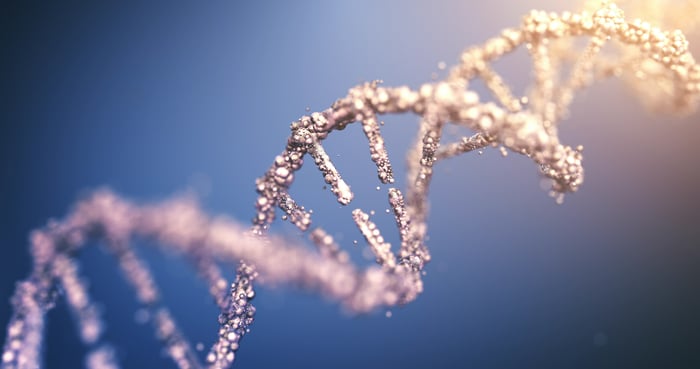 CRISPR's fourth-quarter financial results were pretty good. Revenue for the quarter came in at $77 million, which is a major improvement from the $100,000 it posted in Q4 2018. While its worth mentioning that this revenue is from collaboration agreements instead of product sales, it's still a significant improvement nonetheless.

Vertex's agreement with CRISPR would allow for up to $420 million in milestone payments and ongoing royalties, as well as funding 100% of all research and development expenses. This agreement applies to CTX001 as well as some other unnamed drugs still in preclinical development, which include a potential cystic fibrosis treatment and a drug for Duchenne muscular dystrophy.

The company's significant net income was a surprise for many investors as well. CRISPR reported a profit of $30.5 million for this recent quarter, which is a major turnaround from the $47.6 million net loss reported in the same quarter last year.

Perhaps the most important metric for an early-stage biotech company, however, is its cash position. In that regard, CRISPR is well funded. With more than $943.8 million in cash compared to the $456.6 million reported last year, CRISPR is more than set financially to fund its operations for many years. If CRISPR can maintain a net profit thanks to continued milestone payments, then it won't need to dip into its cash reserves at all. However, assuming net losses return to somewhere near last year's figures (approximately $50 million, for simplicity's sake) as R&D expenses increase, that would mean CRISPR has at least four and a half years of funding based on its current cash reserves.

While it's easy to paint a rosy picture of CRISPR Therapeutics, investors need to remember that with all its candidates still in the early stages of testing (or preclinical development), there's plenty of room for things to go wrong. If CRISPR's drug candidates hit a snag, whether it be in the form of poor clinical results or something else, shares of the company will plummet significantly on the news.

However, that's the case with virtually every company working in the gene editing space right now. CRISPR Therapeutics is definitely a high-risk stock, but it also has plenty of growth prospects as well, with a technology that could change the medical world forever. Over the next year, investors should keep an eye out for further clinical updates regarding CTX001 and other clinical programs, which the company promised to provide sometime in 2020.

If you're comfortable with investing in high-risk, high-reward stocks, then you should consider adding CRISPR to your portfolio. An even better approach, however, would be to own a basket of gene-editing stocks, including CRISPR, as an industrywide investment rather than picking just an individual company that may or may not turn out to be a success. This would include the other companies already mentioned before, such as Editas, Intellia, and Sangamo.

There's a lot of money to be made in the gene-editing sector, and CRISPR definitely has a good chance of becoming a market leader in this area. Just be sure to keep your initial position on the smaller side until further clinical results are announced for its main candidates.