As 2019 comes to a close, it's important to look back and examine what went right and what went wrong in your portfolio, as well as how your stocks are situated to perform in the New Year. This is especially important if your portfolio contains any small-cap biotech companies, which can go through wild fluctuations based on investor perception and seemingly minor events. Investing in biotech requires investors continually conduct ongoing due diligence to identify possible catalysts and industry developments that can move the stock.

One such company that I track on an ongoing basis is Intellia Therapeutics (NASDAQ:NTLA). While Intellia had a relatively quiet year compared to some peers, the company made several meaningful advancements, which further establishes itself as the leader in true in-vivo CRISPR applications. The company has thus far only presented pre-clinical work in mice and non-human primates, but the data has been promising. Intellia has also seen some minor changes in its partnerships during 2019 and will present additional information regarding its partnership with Novartis (NYSE:NVS) in early 2020. The new year will also see Intellia file its first IND with the FDA for transthyretin amyloidosis (ATTR) and will have the possibility to start clinical trials by the end of 2020 if everything proceeds in a timely manner.

Throughout 2018, Intellia made meaningful advancements to its lipid nano-particle (LNP) that is the foundation of the company's in-vivo delivery system. By the end of 2018, the company selected its final LNP, which showed consistent editing rates of around 70%. 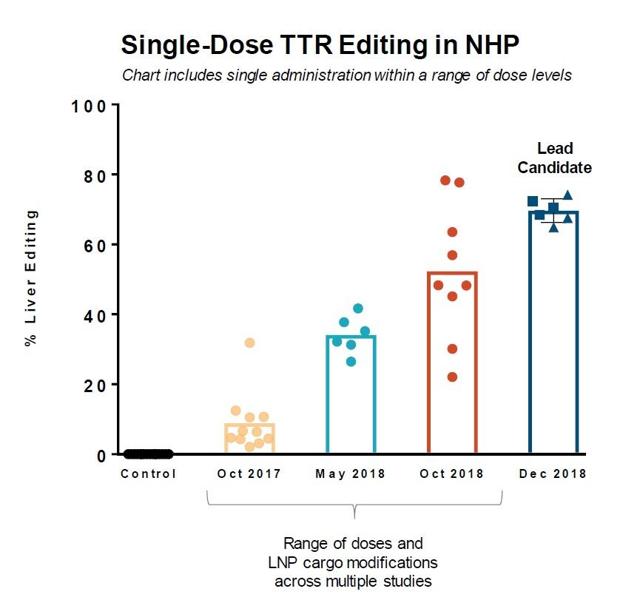 While the advancement of the LNP initially resulted in the ATTR IND date to be pushed back by several months so the company could conduct the required toxicity and dose escalation studies, it ultimately resulted in an in-vivo delivery platform that has a high degree of consistency and therapeutic relevance. The most recent data shows a single dose reduced circulating levels of the TTR protein to be reduced by over 95% out to 40 weeks.

The knockout approach where you simply remove the gene that produces a toxic protein (i.e. transthyretin amyloidosis) or undesirable effect is the easiest target for gene editing. The biggest challenge as well as opportunity lies in gene knockout and insertion of a functional gene. During 2019, Intellia again made several advancements on this front. The company is using its LNP to deliver the gene knockout and an adeno-associated virus (AAV) to provide the insertion of the functional gene. While still very early, the company presented, in collaboration with Regeneron (REGN), successful in-vivo insertion of the Factor IX gene to treat hemophilia B. Initial pre-clinical work has shown this approach results in a normal level of circulating Factor IX protein levels. 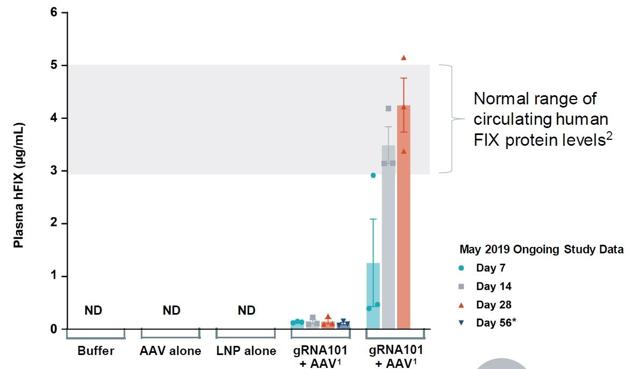 In addition to early pre-clinical work on ATTR and hemophilia B, the company made meaningful strides in Alpha-1 antitrypsin deficiency (AATD). Here again, Intellia used its hybrid LNP-AAV approach. In AATD patients, mutations in the SERPINA1 gene results in lung dysfunction and liver disease. The company presented data showing an 85% editing of the SERPINA1 gene, which resulted in a 95% reduction of the harmful protein. Intellia then inserted the functional SERPINA1 gene three weeks later with therapeutically relevant results.

While Intellia is further behind its peers, CRISPR Therapeutics (NASDAQ:CRSP) and Editas (NASDAQ:EDIT), in getting to the clinic, the company has primarily pursued a much more difficult first step by focusing on true in-vivo gene editing. The company has built a modular platform, which means it has established and optimized its delivery mechanism (LNP) and now only has to change the gRNA as it pursues additional targets in the liver and beyond. This will allow the company to move rapidly into additional targets as it gets ready to enter clinical trials.

Intellia has two primary partnerships. A six-year partnership with Regeneron which extends into 2023 and focuses on targets in the liver and a five-year partnership with Novartis which is set to expire in under two weeks. 2019 was quiet on new developments, until the end of the year when Regeneron surprisingly announced it would reduce its share of the ATTR program with Intellia.

Regeneron remains committed to the program, but reduced its share of global development costs and profits from 50% to 25%. While this came as a surprise to many investors, I believe Regeneron remains committed to further collaborations with Intellia. For one thing, no other dynamics of the partnership changed and Regeneron still maintains options to in-license exclusive rights to as many as 10 targets, including ATTR. While I do see this as a potential red flag investors should be aware of and should take under consideration, I believe Regeneron made this move as more of a reflection about the potential ATTR market size. Over the past two years, considerable advancements in ATTR treatment options have been developed by Pfizer (PFE) and Alnylam Pharmaceuticals (ALNY). Just a couple years ago, patients with ATTR had virtually no effective treatment options. Now patients have 2 FDA approved treatment options. Even if Intellia produces the most effective treatment option, it will still face stiff competition for a small patient population. Regeneron likely made this decision based on pure economics and not as a lack of confidence.

Whatever happens, the announcement will likely provide a catalyst to the stock. The only question will be if it's perceived to be positive or negative by investors. Given that Novartis expanded the partnership just 12 months ago, I believe it's unlikely that the partnership will be dissolved completely. But unlike the Intellia/Regeneron partnership, which has publicly presented pre-clinical data, Novartis has thus far not presented a single piece of pre-clinical data regarding its CAR-T and HSC CRISPR program. It seems unlikely that Novartis would abandon CRISPR when it has been so proactive in the cutting-edge biotech space with acquisitions of AveXis and The Medicines Company (NASDAQ:MDCO). Look for an upcoming press release in the next two weeks as it could really move the stock.

As of 9/30/19, Intellia had $295 million in cash on hand. On the most recent conference call, management believed it had enough cash to get the company into the second half of 2021. With Regeneron reducing its stake in the ATTR program from 50% to 25%, Intellia will be spending more of its own money on this program at a time when costs will begin to ramp up as it files its IND in mid-2020. This will likely result in a faster cash burn than management anticipated. Regeneron was likely spending around $20 million in 2019 on the ATTR program, so while it's not a ton of money, costs will ramp up significantly once it enters clinical trials.

In August 2019, Intellia filed a $300 million mixed shelf offering. This filing basically announces to investors that it has the intention of raising additional money through a variety of options. The company has, in my opinion, gone down a very smart path of conducting small "at the market" agreements. This allows the company to raise money without having to again announce a large dilution equity offering, which biotech firms are notorious for doing and often results in a dramatic after-hours sell-off. During the first three months of 2019, the company has raised $54.1 million in net equity from these "at the market" agreements. While it still dilutes current shareholders, it's a sneaky way for Intellia to slowly raise money that doesn't shock investors.

Intellia has been flying under the radar and quietly amassing some of the most impressive pre-clinical data of any CRISPR or gene editing company out there. It has optimized its LNP deliver vehicle in such a way that puts its in-vivo platform years ahead of its competition. The company now has a modular delivery platform that can quickly adapt to new targets by simply changing the guide RNA. Once the company can prove its platform with ATTR, it can rapidly expand to new targets with minimal new work.

2020 will be an extremely important year for the company. First, investors will get to see how Novartis plans to go forward with its partnership with Intellia. While it's unknown how this will be perceived by investors, I don't believe it changes the core investment thesis for the company. In mid-2020, Intellia will submit its first IND to the FDA for ATTR. This is a huge milestone for Intellia, as well as the industry, as it represents the first in-vivo (non-ocular) treatment for CRISPR in humans. How the FDA chooses to proceed could revolutionize the industry or it could provide significant setbacks.

Intellia isn't a stock for the faint of heart. While it has the potential to be a truly transformational company, it also faces tremendous unknowns. The gene editing/therapy space is notoriously difficult and still in its infancy. Negative news in the industry and seemingly unrelated to specific stocks can result in drastic moves to the downside. Investors have to be prepared for wild swings and must follow developments on regular basis, so they can become familiar with the risk/reward potential.

Disclosure: I am/we are long NTLA. I wrote this article myself, and it expresses my own opinions. I am not receiving compensation for it (other than from Seeking Alpha). I have no business relationship with any company whose stock is mentioned in this article.