Hedge Funds Have Never Been This Bullish On Iovance Biotherapeutics, Inc. (IOVA)

Posted by: admin Categories: Genetics
Comments Off on Hedge Funds Have Never Been This Bullish On Iovance Biotherapeutics, Inc. (IOVA)

Amid an overall bull market, many stocks that smart money investors were collectively bullish on surged through the end of November. Among them, Facebook and Microsoft ranked among the top 3 picks and these stocks gained 54% and 51% respectively. Our research shows that most of the stocks that smart money likes historically generate strong risk-adjusted returns. That’s why we weren’t surprised when hedge funds’ top 20 large-cap stock picks generated a return of 37.6% in 2019 (through the end of November) and outperformed the broader market benchmark by 9.9 percentage points.This is why following the smart money sentiment is a useful tool at identifying the next stock to invest in.

Is Iovance Biotherapeutics, Inc. (NASDAQ:IOVA) an outstanding investment today? Money managers are taking an optimistic view. The number of long hedge fund positions improved by 6 recently. Our calculations also showed that IOVA isn’t among the 30 most popular stocks among hedge funds (click for Q3 rankings and see the video below for Q2 rankings). IOVA was in 28 hedge funds’ portfolios at the end of September. There were 22 hedge funds in our database with IOVA positions at the end of the previous quarter.

Unlike the largest US hedge funds that are convinced Dow will soar past 40,000 or the world’s most bearish hedge fund that’s more convinced than ever that a crash is coming, our long-short investment strategy doesn’t rely on bull or bear markets to deliver double digit returns. We only rely on the best performing hedge funds‘ buy/sell signals. Let’s take a gander at the key hedge fund action regarding Iovance Biotherapeutics, Inc. (NASDAQ:IOVA).

What have hedge funds been doing with Iovance Biotherapeutics, Inc. (NASDAQ:IOVA)? 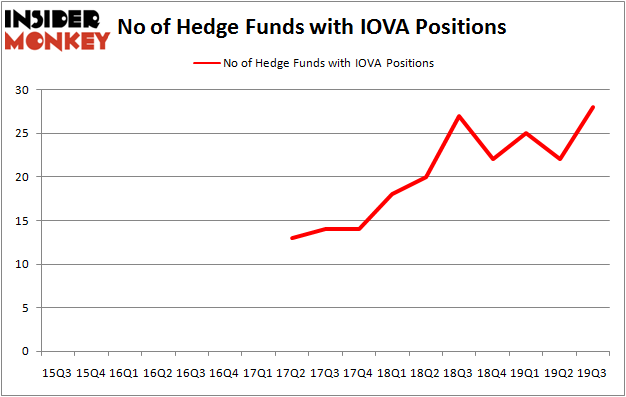 Of the funds tracked by Insider Monkey, Joseph Edelman’s Perceptive Advisors has the most valuable position in Iovance Biotherapeutics, Inc. (NASDAQ:IOVA), worth close to $200.5 million, accounting for 5.4% of its total 13F portfolio. On Perceptive Advisors’s heels is venBio Select Advisor, led by Behzad Aghazadeh, holding a $192.9 million position; the fund has 8% of its 13F portfolio invested in the stock. Remaining professional money managers with similar optimism encompass Farallon Capital, Samuel Isaly’s OrbiMed Advisors and Jeffrey Jay and David Kroin’s Great Point Partners. In terms of the portfolio weights assigned to each position Frazier Healthcare Partners allocated the biggest weight to Iovance Biotherapeutics, Inc. (NASDAQ:IOVA), around 9.96% of its portfolio. Great Point Partners is also relatively very bullish on the stock, dishing out 8.8 percent of its 13F equity portfolio to IOVA.

With a general bullishness amongst the heavyweights, specific money managers have jumped into Iovance Biotherapeutics, Inc. (NASDAQ:IOVA) headfirst. Mangrove Partners, managed by Nathaniel August, created the largest position in Iovance Biotherapeutics, Inc. (NASDAQ:IOVA). Mangrove Partners had $21.7 million invested in the company at the end of the quarter. Israel Englander’s Millennium Management also initiated a $7.4 million position during the quarter. The other funds with brand new IOVA positions are Thomas Bailard’s Bailard Inc, Noam Gottesman’s GLG Partners, and Renaissance Technologies.

As you can see these stocks had an average of 9.5 hedge funds with bullish positions and the average amount invested in these stocks was $68 million. That figure was $898 million in IOVA’s case. CRISPR Therapeutics AG (NASDAQ:CRSP) is the most popular stock in this table. On the other hand Guangshen Railway Co. Ltd (NYSE:GSH) is the least popular one with only 2 bullish hedge fund positions. Compared to these stocks Iovance Biotherapeutics, Inc. (NASDAQ:IOVA) is more popular among hedge funds. Our calculations showed that top 20 most popular stocks among hedge funds returned 37.4% in 2019 through the end of November and outperformed the S&P 500 ETF (SPY) by 9.9 percentage points. Hedge funds were also right about betting on IOVA as the stock returned 25.4% during the first two months of Q4 and outperformed the market by an even larger margin. Hedge funds were clearly right about piling into this stock relative to other stocks with similar market capitalizations.