Got $1,000? You Could Double Your Money by Investing in These 2 Biotechs

Posted by: admin Categories: Genetics
Comments Off on Got $1,000? You Could Double Your Money by Investing in These 2 Biotechs


Biotechs tend to be high-risk and high-reward investments. CRISPR Therapeutics (NASDAQ:CRSP) and Intra-Cellular Therapies (NASDAQ:ITCI) are not exceptions to this rule, and both have a lot to offer for investors. CRISPR is forging ahead with therapies created from its gene-editing technology to treat cancers and blood disorders including sickle cell disease (SCD). Meanwhile, Intra-Cellular already has a drug called Caplyta on the market as a treatment for schizophrenia, and management plans to seek new indications for the drug to treat other psychiatric disorders.

While neither of these companies are profitable yet, both have a strong cash position, minimal debt, manageable expenses, and some recurring revenue. Most importantly, big opportunities are on the horizon for these two stocks. I think there's a good chance that these two could double in value over the next few years. Let's take a closer look. 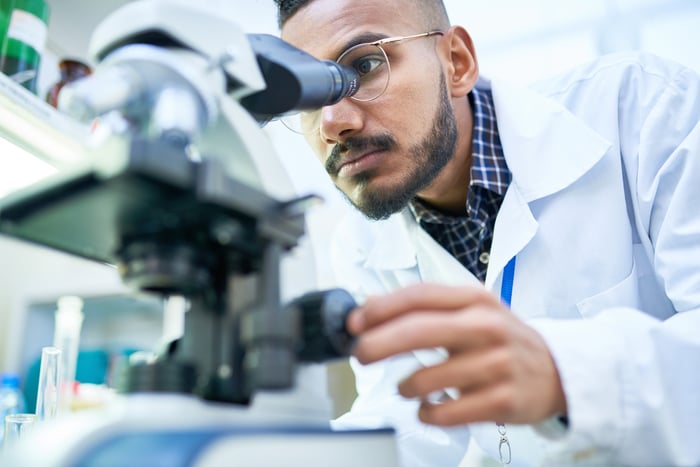 As is the case with many other cutting-edge biotech companies, CRISPR's oncology medicines in development are manufactured using genetically engineered white blood cells. As the company's name implies, its focus is on using the CRISPR gene editing system. In fact, one of the company's co-founders won the Nobel Prize in chemistry this year for her contribution to the system's discovery and characterization. Currently, CRISPR is engaged in phase 1 clinical trials targeting diseases including non-Hodgkin lymphoma, but it also has ongoing trials for conditions like sickle cell disease and beta-thalassemia. While much work remains to be done, preliminary data indicates that its lymphoma program is effective for patients whose cancer has relapsed.

As its approach using genetically modified white blood cells gains traction throughout the clinical trial process, the company plans to expand from hematologic (blood) cancers into the solid tumor market, culminating in the production of increasingly sophisticated yet easy-to-manufacture immunotherapies. But investors will need to wait at least a few years before these projects can start to deliver revenue. Until then, the company has several drug development collaborations with Vertex Pharmaceuticals, which provide it with quarterly trailing revenue of about $78 million. Given CRISPR's trailing operating cash outflow of $154 million and its cash holdings of $1.4 billion, the company's collaboration with Vertex will allow it to continue its development efforts without worrying about running out of money for at least the next few years.

So, given that it has no approved medicines and no revenue growth, how could CRISPR double in value? In short, as its programs advance in the clinic, CRISPR's core gene-editing technology platform will gain more validation and its approach will attain additional proofs of concept. Once its platform can produce therapies that are proven safe enough to use, CRISPR can iterate on additional projects with ease. In other words, all of the company's investment in its titular technology will start to pay off. To be clear, CRISPR is a risky stock -- but if it realizes its core ambitions, it'll be more likely to triple or quadruple than to double.

2. Intra-Cellular Therapies: bracing for takeoff as Caplyta hits the market

Intra-Cellular Therapies (ICT) is an up-and-coming company that isn't afraid to tackle some of medicine's most challenging pathologies. In March, the company successfully commercialized its drug Caplyta, which is indicated for treatment of schizophrenia. While sales have been slow to grow as a result of the pandemic, Caplyta is likely to drive rapid revenue growth for at least the next several years as it deepens penetration of the market.

ICT also has several interesting late-stage development programs to earn new indications for Caplyta. These programs target difficult-to-treat psychiatric disorders including bipolar depression and behavioral disturbances in Alzheimer's patients. It plans to seek regulatory approval to market Caplyta for bipolar depression within the coming year, which will provide a boost to its stock price. Then, the company's revenue will start to expand as sales pick up, which will hopefully put it on the path to profitability. At present, ICT's trailing revenues are just over $3 million, so progress will be transformed into rapid growth quite quickly.

In the meantime, ICT has only $25 million to worry about in the way of debt, and its trailing cash burn rate of $163 million will be easy to sustain for a couple of years thanks to its $408 million in funds on hand. This means that revenue from Caplyta can go directly toward growth, which is a highly positive sign for investors. Once the company's revenue starts to expand each quarter, its stock price will start to shoot up.

« How to remove low abundance and less prevalent data from my dataset?
Help me in PANTHER »