I am working on identifying insertion site and copy number of a retroviral vector integration in human cell line. The sample was sequenced by WGS on NextSeq with around 900 million PE150 reads.

I concatenated hg38 and the vector genome and mapped reads to this combined reference using BWA. I used SAM format to identify reads containing transgene using following command from the SAM file.

The problem is that the trangene_reads.sam is showing me that the vector has mate pairs mapping in all of the chromosomes e.g chr1, chr2, chr3, and so on.

I visualized bam file for chr7 using IGV and setting the visualization to show the chromosome by mate. The coverage for the target at the region is 2X i.e 2 reads map to the target in the region chr7:50343667

Here is the IGV screenshot 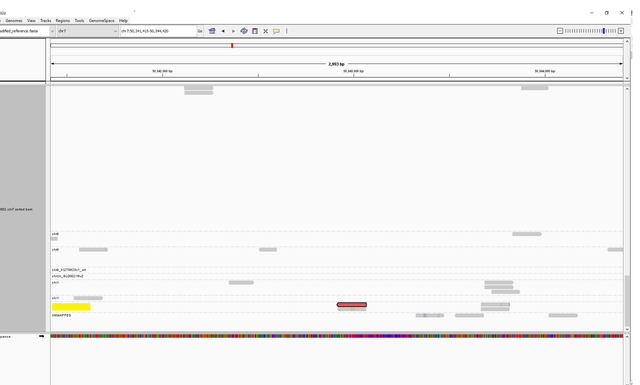 The highlighted yellow region is the vector region.