Could CRISPR be used as a SARS-CoV-2 antiviral?

Posted by: admin Categories: Genetics
Comments Off on Could CRISPR be used as a SARS-CoV-2 antiviral?


The CRISPR-Cas system is capable of editing DNA and RNA in situ in living organisms, and as an antiviral agent, can specifically identify and target nucleic acid sequences originating from a pathogen.

The potential of using this gene manipulation technology as a SARS-CoV-2 inhibitor or prophylactic is investigated in a review recently uploaded to the journal Experimental Biology and Medicine (April 25th, 2021) by Arnab Banerjee and colleagues.

CRISPR-Cas systems have been developed for a variety of specific purposes and categorized across a number of classes and types. Class 1 systems use multiple Cas proteins that form a complex, while class 2 systems are based on a single Cas protein, and each class is composed of three types further divided into 19 subtypes.

Most CRISPR therapeutics have focused on correcting genetic anomalies, though an emerging class of antivirals based on the disruption of viral mRNA is of increasing interest. 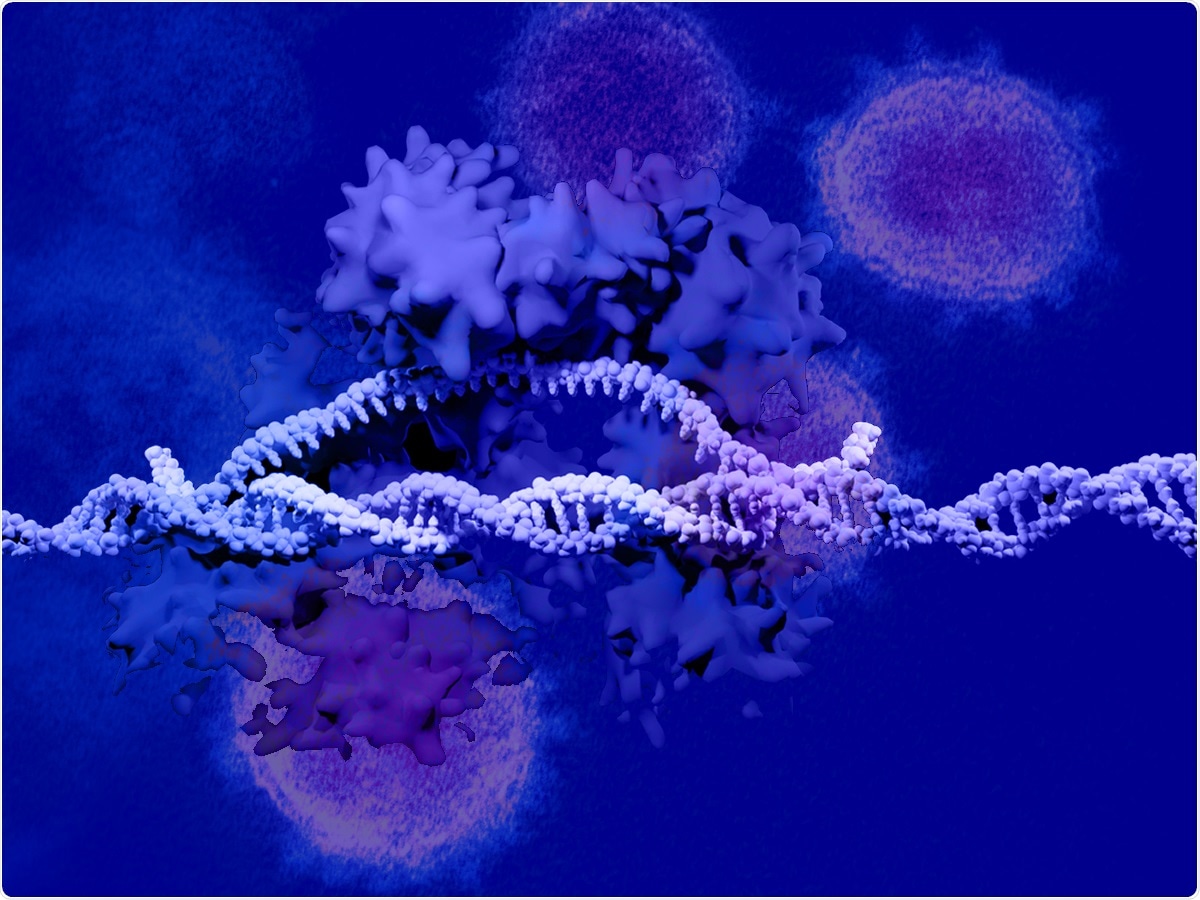 Cas9 usually targets double-stranded DNA (dsDNA), though it has previously been manipulated to target endogenous messenger RNA (mRNA), and is, therefore, able to affect the expression of target genes.

It could, therefore, also potentially be used to control virus RNA or host factor mRNA. Cas9 requires transactivating CRISPR RNA (crRNA), in addition to crRNA, to successfully target a nucleic acid sequence. Cas12a (previously Cpf1) targets single-stranded DNA (ssDNA), and only requires crRNA to do so.

Once bound to its target it remains there, cleaving other complementary single-stranded nucleic acids in a process called collateral cleavage, and would therefore likely make a more effective viral RNA inhibitor.

Many human host proteins have been implicated as SARS-CoV-2 host factor proteins, being commandeered by the replication cycle.

Disrupting these could lessen virus pathogenicity, though the resulting influence on the host would need careful monitoring, and such systems have not yet been tested in the lab. Identification of such sites has, however, been achieved by this method. 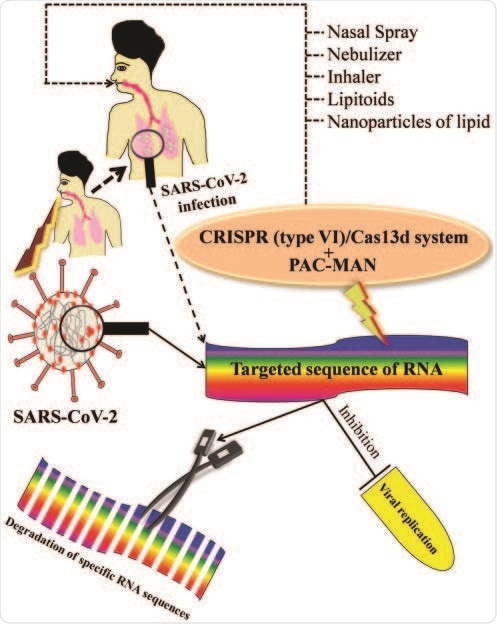 Cas13 is only able to target single-stranded RNA, having previously been used to specifically cleave viral ssRNA complimentary to its crRNA. Cas13-associated enzymes also allow the manipulation of target RNA, effective against both transcriptional and splicing-associated RNA. Like Cas12, Cas13 remains bound to the target sequence once there and engages in collateral cleavage. Thus catalytically dead Cas13 mutants can also be used in diagnosis: to evaluate replication, localization, and evolution of a virus via genome tagging.

A research group from Stanford University recently applied Cas13 to SARS-CoV-2 RNA knockdown, suggesting that the technology can inhibit infections.

Prophylactic antiviral CRISPR in human cells (PAC-MAN) has also been employed in the lab against influenza A and H1N1.

The Cas13 protein inhibits viral replication by degrading the RNA released into the cell following infection and must ideally target a significant, conserved, and common RNA sequence.

Several regions of the SARS-CoV-2 genome have been identified as suitable targets for PAC-MAN, and are likely to include those relating to the spike protein and nucleocapsid.

In vivo CRISPR studies are relatively rare, and thus the clinical potential of CRISPR therapeutic systems is poorly tested.

Additionally, some early reports regarding CRISPR antivirals indicate that they may incite the development of escape mutants, producing more pathogenic strains. However, the inclusion of multiple CRISPR targets within the pathogen genome has alleviated this problem in more recent years, though issues surrounding the delivery of CRISPR systems to tissues and cells before early excretion remain a challenge.

Nanoparticle delivery systems may be the solution, significantly improving the solubility, biodistribution properties, and retention time in vivo.

Several groups have seen success with incorporating CRISPR-Cas systems into lipid or polymer nanoparticles, utilizing complimentary ligand-receptor active targeting systems and triggered release mechanisms to release the CRISPR payload into the cytoplasm of the intended cells.

Specific to SARS-CoV-2 and other upper-respiratory infections, nasal sprays or nebulizers may be able to deliver a relevant and meaningful dose to the most heavily infected area. However, this is yet to be seen.