There's plenty of excitement surrounding the gene editing space right now, and for good reason. If you're looking to pick a company in this sector to invest in, both Editas Medicine (NASDAQ:EDIT) and CRISPR Therapeutics (NASDAQ:CRSP) are strong choices.

Considering just how young this sector is and the uncertainty in the world of biotech, with only results from early clinical trials available at this point, it's impossible to say which particular company will end up with a winning drug candidate. If you had to choose between Editas and CRISPR, however, which is the better investment today?

It's not an easy question, but let's compare the two companies side by side and see if a clear answer emerges. 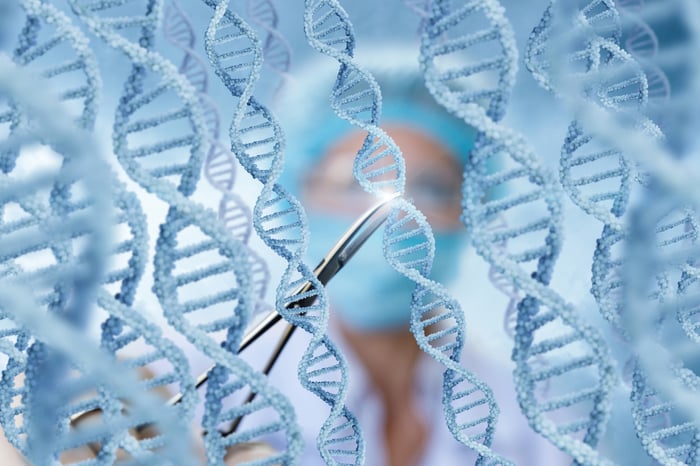 Both Editas and CRISPR have drug candidates that overlap with each other, as well as treatments that target completely different markets. Editas' EDIT-301 and CRISPR Therapeutic's CTX001 target patients with sickle cell disease and beta-thalassemia, conditions that affect hemoglobin's ability to transport oxygen throughout the body.

Blood disorders are a fairly common area for gene editing drug developers to target, with other companies like Sangamo Therapeutics recently publishing preliminary results for its own drugs. There are a few reasons why blood disorders are such an attractive market. For one, there's no treatment that cures either sickle cell disease or beta-thalassemia, only methods of mitigating the symptoms. Nor is this an obscure market. Around 100,000 people have sickle cell disease in the U.S. and millions of people have the disease around the world.

At these very early stages of clinical development, it appears CRISPR has a lead over Editas and other companies. Its CTX001 treatment showed success in two patients, one with infusion-dependent beta-thalassemia and the other with sickle cell disease, with both patients experiencing a complete reversal in key symptoms.

In contrast, EDIT-301 is still at the proof-of-concept stage, with the company announcing strong preclinical results in a study done on mice. It will take Editas quite some time before EDIT-301 can seek U.S. Food and Drug Administration approval, let alone be available to the public.

While CRISPR's main efforts are in blood disorders, Editas' most promising drug candidate is in a completely different market. EDIT-101 is a drug that targets a rare form of infant blindness called Leber congenital amaurosis (LCA). Approximately one in 50,000 infants are diagnosed with this condition, which quickly leads to an improperly developed retina that struggles to detect color and light.

There's only one other treatment for LCA at present, which targets only a specific version of the condition. Luxturna, a gene editing drug created by Spark Therapeutics, costs $850,000 to treat both eyes and completely cure the disease. It's easy to see how EDIT-101 could charge a similar amount. EDIT-101 is also designed to treat all types of LCA, rather than a specific type as in the case with Luxturna.

It's also worth mentioning that Editas might have an edge over CRISPR in terms of developing future treatments. Editas boasts exclusive access to technology owned by Harvard, MIT, and the Broad Institute, alongside an unmatched intellectual portfolio of 70 patents, with another 600 patent applications currently pending.

On the other hand, CRISPR is developing a trio of cancer immunotherapies: CTX110, CTX120, and CTX130. At the moment, only CTX110 is undergoing clinical testing at the moment, with current trials seeking to evaluate just how effective the drug is at targeting specific cancer-related antigens in patients . Cancer immunology is already a massive market, with some estimates expecting that it will grow to $126.9 billion by 2026.

Of course, cancer immunology is a hot market, with many companies developing their own treatments in this area. Specifically, CTX110 is a chimeric antigen receptor T-cell (CAR-T) therapy, which broadly means that scientists remove immune cells from a patient, retrain them, and reintroduce them into the patient's body. Although other healthcare giants including Novartis and Gilead are developing their own CAR-T therapies, CTX110 could have an edge over its competition in that it could be cheaper than current treatment methods, which often cost up to hundreds of thousands of dollars per patient.

Even if CRISPR's CTX110 only captures a fragment of the total cancer immunology market, it would make the drug a blockbuster. That's why investors are excited about its prospects.

Both CRISPR and Editas are early stage biotechs, so it's expected that they would be reporting significant quarterly losses as they develop their drug candidates. CRISPR has a market cap 2.5 times larger than that of Editas but has historically reported bigger losses as well. CRISPR reported $211.9 million in revenue for the third quarter, with a surprising net income of $138.4 million.

While definitely a good quarter, for most of the year, the company has been losing money. In the previous quarter, CRISPR reported a loss of $53.7 million with revenues of only $318,000. When looking at the first nine months of 2019, CRISPR is only at a positive $36.3 million in income despite its strong third quarter.

In comparison, Editas posted Q3 2019 revenue of just $3.8 million, a tiny fragment of CRISPR's gross income. However, unlike CRISPR, Editas reported a net loss of $32.9 million, which has more than doubled from the $15.2 million loss reported last year. Both companies have ample cash on hand to last them at least a year at their current rate of expenditures, with Editas having $332.6 million and CRISPR has around $629.7 million.

CRISPR trades at around $68 per share while Editas comes in at $32 per share. When looking at these companies from a traditional valuation perspective, Editas' extremely low revenue figures would give it a pretty high price-to-sales (P/S) ratio of 109.5 right now, while CRISPR has a more reasonable 17.2 P/S ratio. However, that's not really the best way to look at clinical stage biotech stocks, as these metrics can swing dramatically depending on how the quarterly results turn out. To put this into perspective, CRISPR's P/S ratio shot up to over 1,800 around the time it reported its Q2 results.

Instead, investors should put more emphasis on qualitative factors, such as how well a company's drug candidates are doing, how big the potential markets for these drugs are, and how much competition there will be from other firms. Cash, revenue, and net income/loss figures are next in importance, while traditional financial metrics aren't as big of a deal for clinical stage biotechs.

Both companies are among the strongest picks in the gene editing space right now, and having to choose between them isn't easy. I'd give a slight edge to CRISPR Therapeutics since its early clinical trials are confirming positive results from its CTX100 treatment. While proof-of-concepts and preclinical studies from Editas might show positive signs, it's easy for things to change significantly once testing on humans begins.

Putting aside the hypotheticals, both gene editing stocks are still great candidates if you're looking for high-risk, high-growth investments. The best way to play the gene-editing sector is by getting a broad exposure to a collection of the top gene editing stocks without putting all your eggs in one basket. In this respect, both CRISPR Therapeutics and Editas Medicine are stocks that should be on your radar.