Are These The Best Biotech Stocks To Watch In November 2020?

Posted by: admin Categories: Genetics
Comments Off on Are These The Best Biotech Stocks To Watch In November 2020?

Could These Be The Best Biotech Stocks To Buy Or Sell Right Now?

Biotech stocks have been in the center of attention for all the right reasons. It is no surprise after all as biotech companies continue to improve the quality of life that we enjoy today. Human beings are living longer and healthier lives thanks to the progress made in the biotech industry. Biotech companies are making impressive progress in many segments of the medical field. From the development of new drugs to new forms of treatment, the sky’s the limit when it comes to the potential of the biotech industry.

Today’s biotech news places the limelight on the COVID-19 vaccine race. Pharmaceutical giant Pfizer (PFE Stock Report) announced on Monday that its vaccine candidate was 90% effective in treating the virus. This has given the world hope as the pandemic has infected more than 50 million and killed 1.2 million to date. If anything, there is an utmost urgency for this vaccine. However, we must not overlook other prospective biotech stocks that are in the stock market despite all the news surrounding the vaccine race.

One fine example is Vertex Pharmaceuticals (VRTX Stock Report). The company boasts an impressive portfolio of therapies and drugs that covers cystic fibrosis and sickle cell disease. 50 years ago, if you were to be unfortunate to have these diseases, it was essentially a death sentence. Today, it is treatable thanks to Vertex. VRTX stock has been trading at a bargain considering its pipeline and earnings to come. The company’s share price plummeted after it announced that it was pulling the plug on treatment for its pulmonary-drug portfolio. This would be an opportunity for investors to buy on the dip. With that in mind, here are 3 top biotech stocks for investors such as yourself to consider.

Five Prime Therapeutics (FPRX Stock Report) was relatively unheard of until this week. The clinical-stage biotech company has had a staggering 200% increase in share price in the last 2 days, currently valued at $16.72 per share. This spike in share price is in response to positive mid-stage trial results for its stomach cancer drug candidate, bemarituzumab.

The drug is the first to target tumors containing an overabundance of a protein called FGFR2b+. 30% of HER2-gastric cancers worldwide have FGFR2b+ tumors. The company says that the study validates FGFR2b+ as a target in cancer treatment. These could potentially help the company develop its drug in other forms of cancer. Cancer, which is often untreatable especially if detected late, could finally be defeated with the Five Prime Therapeutics drug. 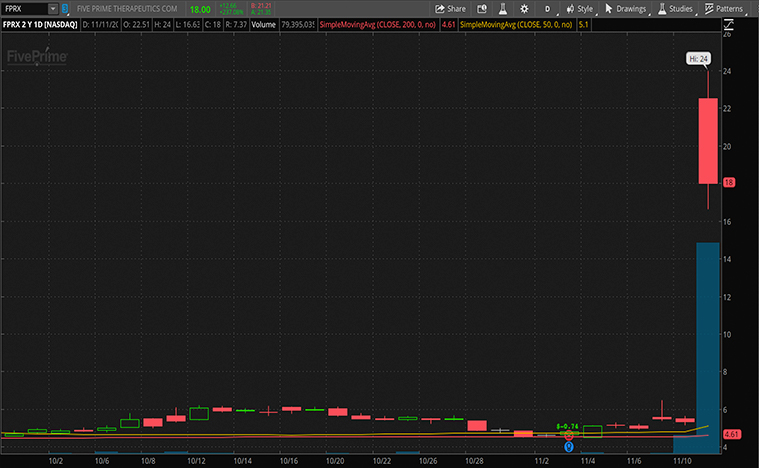 The company together with partner Zai Lab (ZLAB Stock Report) also reported that the combination of Bemartuzumab and mFOLFOX6 chemotherapy had beaten placebo plus mFOLFOX6 on three efficacy endpoints. The three endpoints are median progression-free survival, median overall survival, and overall response rate. The company also has other drugs that are in the pipeline. Its FPT155 can stimulate anti-tumor immunity and is being studied for the treatment of solid tumors. With so many promising treatments on the way, will you consider adding FPRX stocks into your portfolio?

Biotech darling CRISPR Therapeutics (CRSP Stock Report) has had an interesting year in the stock market. The company specializes in developing transformative gene-based medicine for a plethora of human diseases. Its programs cover immuno-oncology, hemoglobinopathies, and regenerative medicine to name a few. The company has seen an impressive year-to-date increase of 70% in its share price. This is despite dropping from an all-time high of $111.90 in October when the company made headlines for its T-cell therapy CTX110. The program had unexpectedly caused the death of a participant after he received a relatively high dosage of the treatment.

This setback, however, should not draw investors away from the company. It is simply because CRISPR Therapeutics has immense potential in its advanced gene-editing technology. Despite the death of one patient, others in the CTX110 trial had experienced positive effects. More importantly, its cell therapy manufacturing methodology has been proven in a real-world setting. The company’s co-founder, Professor Emmanuelle Charpentier was awarded the 2020 Nobel Prize in Chemistry for her groundbreaking work on the CRISPR/Cas9 system. With so many good things happening to CRISPR Therapeutics, the company does have the fundamentals to make further gains in the long run. 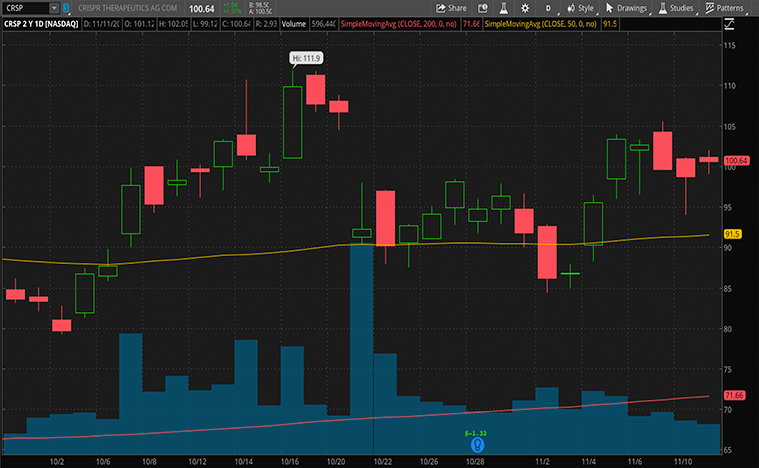 The company has received a Rare Pediatric Disease Designation from the Food and Drug Administration (FDA) for its CTX001 program. CTX001 is used to treat sickle cell disease (SCD) and transfusion-dependent beta-thalassemia (TDT). The high mortality rate for patients with these diseases could be a thing of the past should CTX001 be successful. With such promising growth ahead for the company, would you consider adding CRSP stocks to your watchlist?

Another biotech stock that has been under the radar is Pacific Biosciences of California (PACB Stock Report). The company specializes in molecular biology and focuses on Single Molecule, Real-Time (SMRT) Sequencing Technology. It allows researchers and scientists to study biological systems by enabling real-time analysis.

Pacific Biosciences (PacBio) on Tuesday reported that it has priced its previously announced underwritten public offering of an aggregate of 7.4 million shares of its common stock at a price of $14.25 per share. The company intends to use the net proceeds for additional product launches, research and development, commercial infrastructure expansion, and general corporate purposes. PacBio also plans to use a portion of the net proceeds to acquire or invest in complementary businesses and technologies. 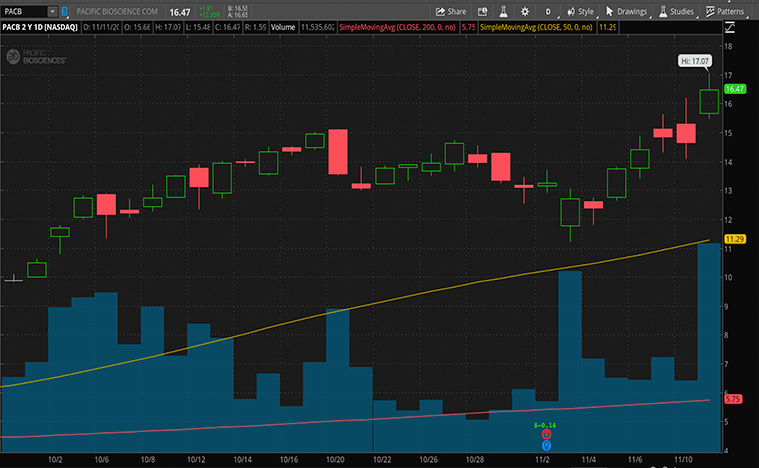 The company has enjoyed a year-to-date increase of 222% in share price and is currently valued at $16.69 per share. The company also reported a revenue of $19.1 million in the third quarter. Top things off, PacBio has launched its new Sequel IIe System, representing the next evolution of its sequencing platform. The new system features significantly increased computational capacity and on-instrument data processing.  The company has also announced a collaboration with Asuragen Inc. to develop assays based on SMRT Sequencing for the carrier screening market. With that in mind, will PACB stocks be a top biotech stock to buy for the long term?