3 Reasons to Buy Vertex Pharmaceuticals and 1 Reason Not To

Posted by: admin Categories: Genetics
Comments Off on 3 Reasons to Buy Vertex Pharmaceuticals and 1 Reason Not To


Vertex Pharmaceuticals (NASDAQ:VRTX) is a pharmaceutical company that has utilized its portfolio of medicines for cystic fibrosis (CF) to grow consistently, expanding its trailing revenues by more than 423% over the last five years. But Vertex's stock has underperformed the market this year. The company's heavy focus on CF treatments has historically paid off, but the strategy may carry longer-term risks in part because Vertex's drugs will eventually lose their patent exclusivity. Is Vertex approaching the end of its run as a stalwart growth stock, or does it still have some gas in the tank for new investors?

I expect that Vertex will continue to grow for quite some time, and that it will return to outperforming the market relatively soon. But the factors driving that future success probably won't be quite the same as those that have carried it to this point. Here are three reasons that Vertex could be worth buying and holding for the long term -- and one reason why investors might want to be cautious. 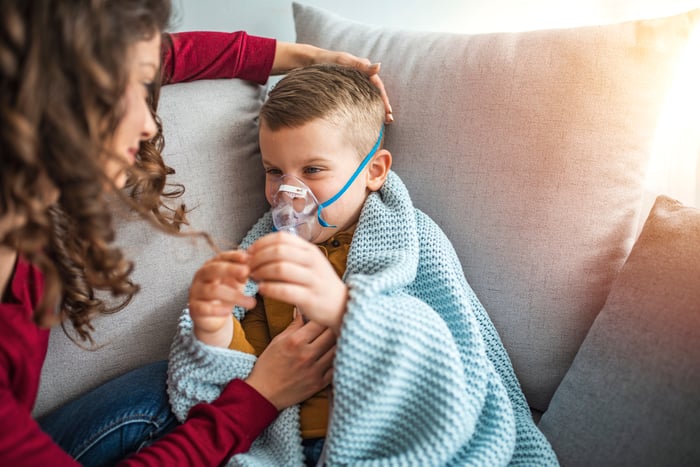 Vertex earned practically all of its $5.4 billion in revenue over the past year from sales of its life-saving medicines for CF -- a relatively rare and difficult illness. About 100,000 people around the world have CF, and in the next five years, the company aims to expand its reach to at least 90% of those patients. The company is already within spitting distance of that goal thanks to the reach of its drugs as they are currently being marketed, and regulatory approvals for new combinations of those treatments are expected in the near term. Vertex's integration into the CF community is substantial, and its ability to market products within the group is quite impressive. Within a year of launching its drug Trikafta, the company claimed that the "vast majority" of the 18,000 eligible patients in the U.S. had enrolled in treatment.

Furthermore, Vertex has an even larger ambition to reach 100% of people with CF by creating new genetic therapies that will help the estimated 10% of patients with variants of the disease that can't be effectively treated with its current offerings. At present, Vertex sells four different medications for CF, three of which are combination therapies utilizing different drugs like lumacaftor and ivacaftor, which were developed in-house. By combining its successful therapies into new formulations, Vertex can address different needs within CF patients while also extracting the maximum amount of value from its prior research and development (R&D) efforts. This also allows Vertex to avoid some of the revenue damage inflicted by patent expiration. On the whole, this has proven a profitable strategy. Without a doubt, Vertex is poised to maintain its competitive position in the CF market.

Through a strategy of pursuing expanded regulatory approvals that make its drugs available to ever-wider swaths of the CF patient population, Vertex has achieved impressive revenue growth. Year over year, its quarterly revenue for the period ended June 30 rose by 62%, and its earnings expanded by a shocking 213.1%. Importantly, the company has been consistently profitable, and sports a margin of 38.51%. It could pay off its small debt burden instantly with cash on hand if it so chose. All of those factors make it quite a favorable investment in comparison to many of its pharmaceutical industry peers.

3. Genetic therapies in new disease areas will round out Vertex's offerings

Vertex also has a pipeline treatment -- CTX001 -- that's undergoing phase 1 clinical studies for both sickle cell disease (SCD) and beta thalassemia. It's something of a departure from the company's typical fare both in terms of the diseases targeted and the therapeutic modality. While Vertex's therapies for CF are based on traditional pharmacology, CTX001 uses genetic editing technology and is being developed in collaboration with CRISPR Therapeutics (NASDAQ:CRSP).

Investors should be pleased with Vertex's efforts to break into new markets with long-term growth potential. By working with CRISPR Therapeutics, Vertex can also gain experience with genetic therapies, which have been proposed as a potential route to advanced treatments for CF, and even a cure for the disease. In other words, Vertex's new gene therapy projects might help it develop a groundbreaking treatment to offer its core market.

4. Diversification will be a long road

With all of that said, investors should temper their expectations for Vertex Pharmaceuticals. One significant reason to be wary of the stock is that the road to diversifying into new markets will be a long and expensive one, and the company has only taken the first few steps. While its efforts in the CF market have been wildly successful, it may not have the organizational resources necessary to replicate that success in different contexts. Over the last five years, it has boosted its R&D spending sharply, and even heavier investments will be required when and if its early stage projects reach the later clinical trial stages.

Given that its projects outside of CF are in their infancy, investors should anticipate it taking as long as a decade for those efforts to yield results and revenues. In the meantime, Vertex Pharmaceuticals may still be able to grow its sales within its formidable CF catalog, but it's also possible that chasing the last 10% of that patient population will cost more than it returns.

« How to get enome feature annotation through NCBI api ?
Redundancy removing in sequences »