Posted by: admin Categories: Genetics
Comments Off on 2 Top Stocks for Retirees


Investing for retirement income requires a conservative approach to picking stocks. Volatile growth stocks might not protect the principal of your investment, and high-dividend securities might be too pricey to buy. On the other hand, if you're in it for income, there isn't much point in buying shares in a company that doesn't pay a dividend or grow rapidly enough to justify holding onto for just a few years.

There's no substitute for a well-diversified portfolio, but there are a couple of long-standing healthcare stocks retirees can count on for the earnings stability, dividend payments, and relatively safe growth they desire. Let's dive in and examine why these two companies are great pickups for retirees. 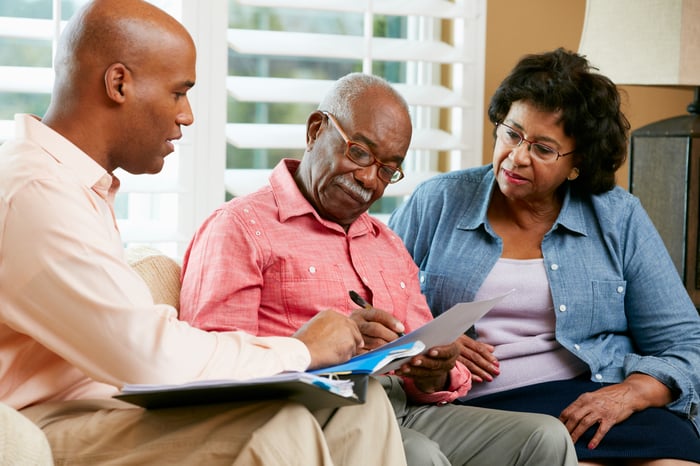 Johnson & Johnson (NYSE: JNJ) is one of the largest companies in the world. It's also one of the most stable, thanks to its massive collection of consumer healthcare products. Though its trailing dividend yield of 2.6% is only slightly above average, the company has increased its annual dividend for an astonishing 57 years in a row. As the reliability of dividend payments goes, it's nearly impossible to find a company with a better track record of growth.

Johnson & Johnson is more than a dividend stock, however. It's also a remarkably resilient company that has grown faster than the market over the past 20 years. During the Great Recession of 2007-09 and the dot-com crash of 2001, Johnson & Johnson fared well, shedding little value compared with its historical price. Likewise, its trailing-12-month earnings before interest, taxes, depreciation, and amortization (EBITDA) have increased over time, meaning that the company's strength is growing over the long term. Consistent earnings increases also suggest that the company's leadership has a history of being effective and selecting worthwhile replacements when an executive's tenure draws to a close.

Effective leadership tends to deliver for shareholders, and Johnson & Johnson's is no exception. Over the past decade, the company has preferred to buy back its outstanding shares, helping the stock price to grow. What's more, Johnson & Johnson hasn't diluted equity value for its shareholders by issuing new common stock in more than 10 years, so retirees can have some confidence that their holdings won't weaken over time. 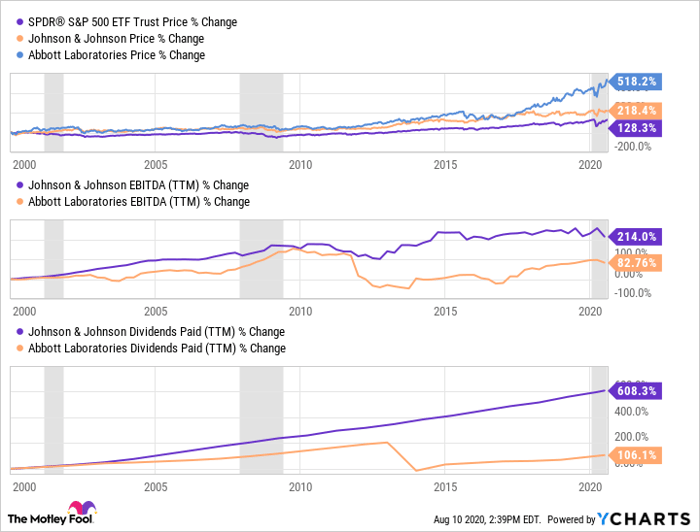 Abbott Laboratories (NYSE: ABT) is similar to Johnson & Johnson in that it's a deeply established healthcare company with a plethora of critical products and therapies. Remarkably, the company's earnings grew substantially during the Great Recession and held steady in the dot-com crash, so it has a history of resilience that will help it to weather the current market conditions.

In the long term, Abbott's earnings haven't grown as much as Johnson & Johnson's, but its stock price has consistently risen, and its dividend history -- 47 years of continuous increases -- is nothing to sneeze at (though its trailing annual yield of 1.4% is a bit low compared to the healthcare industry average of about 2.3%. Thus, retiree investors might need to consider selling the stock to capture value rather than waiting for the accumulation of annual dividend increases to pay off.

In terms of the consistency of its value as an investment, Abbott Labs last issued new common stock in 2007, but it has bought back shares every year since 2003. If this this long-running trend continues, the stock price will continue to grow and shareholder value won't be diluted.

If Abbott's stock seems a bit expensive at the moment, be aware that it might not be available at a discount anytime soon. That said, if the market crashes and Abbott follows, that might be the right time to grab a few shares and buckle up for a five-year holding stint.

10 stocks we like better than Johnson & Johnson
When investing geniuses David and Tom Gardner have a stock tip, it can pay to listen. After all, the newsletter they have run for over a decade, Motley Fool Stock Advisor, has tripled the market.*

David and Tom just revealed what they believe are the ten best stocks for investors to buy right now... and Johnson & Johnson wasn't one of them! That's right -- they think these 10 stocks are even better buys.