Gene-editing technology allows for the manipulation of the basic building blocks of life, so to speak. It grants scientists the ability to add, remove, or modify the genetic material of an organism, which can affect how said organism functions. Treatments based on this technology seek to replace the defective genes responsible for a medical condition with healthy versions. This technique can lead to the development of treatments or cures for diseases that are otherwise extremely difficult, if not impossible, to treat.

Developing a treatment for an illness with a serious unmet need often turns out to be highly lucrative for a biotech company. In other words, it might be a good idea for investors to look through the current biotech leaders in the field of gene editing and figure out which of them could be winners in the long run. Among the many biotech companies that focus on gene editing, two of the most promising are CRISPR Therapeutics (NASDAQ:CRSP) and bluebird bio (NASDAQ:BLUE). Here's why.

CRISPR Therapeutics made a lot of noise last year when it announced positive results from a phase 1/2 trial for its most promising pipeline candidate, CTX001. This product is being developed as a potential treatment for two blood disorders called sickle cell disease (SCD) and transfusion-dependent beta-thalassemia (TDT).

The trial investigated the efficacy of CTX001 on two patients, one with SCD and the other with TDT. Four months after receiving treatment, the SCD patient did not experience any vaso-occlusive crises (VOC), a common side effect of SCD that is characterized by acute pain. 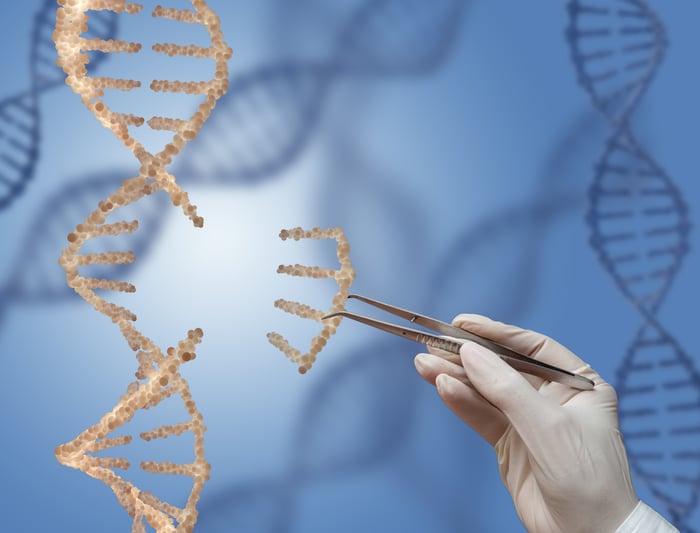 Before receiving the treatment, this patient had experienced an average of seven such crises per year.

Further, while the TDT patient required an average of 16.5 blood transfusions per year before receiving the treatment, this patient was transfusion-independent nine months afterward.

CRISPR Therapeutics released even more exciting data from this study earlier this month. The company announced that the first patient treated with TDT was still transfusion-independent 15 months after receiving the treatment, and the SCD patient who was first treated with CTX001 remained free of VOCs nine months after the treatment.

CRISPR Therapeutics was already a stock worth buying before it announced these new results, in my view. But the newly released data makes it even more attractive.

Let's not forget that CRISPR Therapeutics currently has at least one major partner, Vertex Pharmaceuticals (NASDAQ:VRTX). The two companies have been partners for awhile. Last year, they expanded their collaboration when Vertex made an upfront payment of $175 million -- with the possibility of additional incentive payments -- in exchange for the exclusive rights to some of CRISPR Therapeutics' pipeline products.

During the first quarter, CRISPR Therapeutics recorded a net loss of $69.7 million, but the company also had a cash and cash equivalents balance of $889.7 million as of March 31. Given its cash balance, I don't expect the company to dilute existing shareholders soon. And considering all these factors, I think CRISPR Therapeutics, whose stock is up by 23.1% year to date, will continue beating the market in the long run. In short, it is worth investing in this biotech stock today.

Bluebird hasn't performed well of late. The company's stock is down by 30% since the beginning of the year. However, I think the company's troubles on the stock market present an excellent opportunity to grab its shares for a discount. Unlike most other gene-editing companies, Bluebird already has an approved product on the market. The product in question is called Zynteglo, a treatment for TDT that was approved in Europe in June 2019. 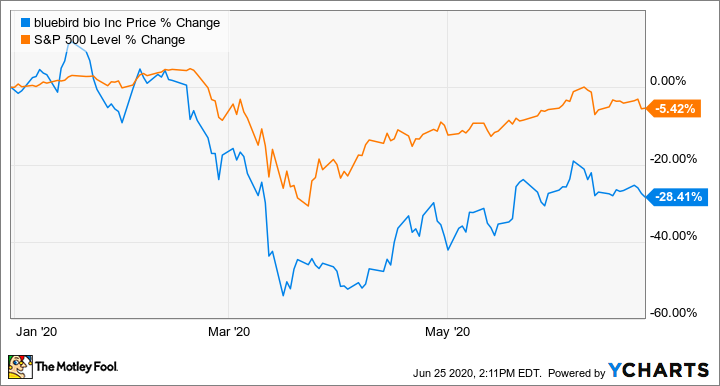 However, there are a few caveats to consider. First, Zynteglo isn't just any other treatment -- it can only be administered by properly trained healthcare professionals with the right equipment. As the company itself said: "Due to the highly technical and specialized nature of administering gene therapy in rare diseases, bluebird bio is working with institutions that have expertise in stem cell transplant as well as in treating patients with TDT to create qualified treatment centers that will administer Zynteglo." Thus, launching Zynteglo was more complicated than it would have been for most other treatments.

Second, although Bluebird priced Zynteglo at a hefty 1.58 million euros, the company said it would accept payment plans. Patients can pay 315,000 euros upfront and make four additional payments spread over several years if the treatment is successful. This payment plan option means the revenue from Zynteglo will come in more slowly than it otherwise would have.

Even with these caveats, I think Bluebird's stock is worth buying, especially as there were no treatments for TDT before the approval of Zynteglo. This treatment also serves as the ultimate proof of concept for the company's ambitions to develop several more gene therapies for other rare conditions.

Bluebird is going after several additional targets, including SCD. The company recently released some data from a phase 1/2 study for LentiGlobin, its investigational treatment for SCD. The company said that it witnessed a "near-complete elimination" of VOCs in SCD patients during the trial.

Lastly, in collaboration with partner Bristol Myers Squibb (NYSE:BMY), Bluebird is developing a potential blockbuster cancer treatment called ide-cel. The two companies recently submitted a Biologics License Application (BLA) to the U.S. Food and Drug Administration (FDA) for ide-cel as a treatment for multiple myeloma patients who have received at least three prior therapies.

In my view, Bluebird's stock will rebound in the coming months as the company's revenue increases. The approval of ide-cel could serve as another catalyst for Bluebird. I think investors who buy shares of Bluebird now will be glad they did so in five years.