Here's a simple argument for why long-term investors should consider buying shares of biotech companies. Since its inception in 2006, the SPDR S&P Biotech Index -- an industry benchmark -- has crushed the S&P 500, as the graph below shows. 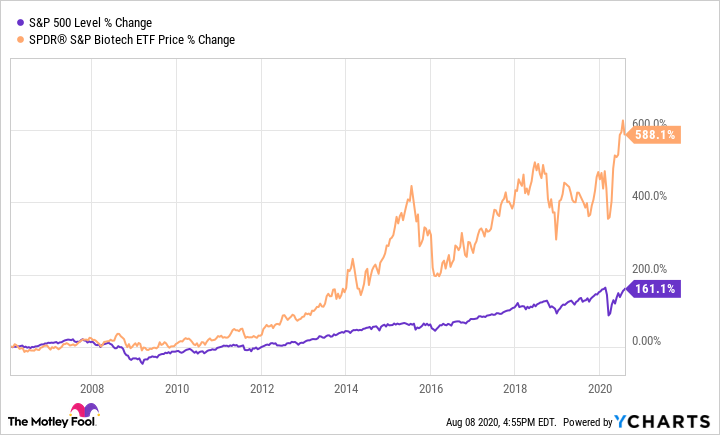 This graph doesn't show us the specific biotech stocks that performed well throughout this period, and we can't assume the trend will continue indefinitely; after all, the market is forward-looking. Still, there are excellent biotech stocks to consider buying. Two in particular that have made significant breakthroughs -- and could provide market-beating returns for many years to come as a result -- are Vertex Pharmaceuticals (NASDAQ:VRTX) and Provention Bio (NASDAQ:PRVB). Here's why both of these companies are great picks for investors.

Cystic fibrosis (CF) is a rare genetic condition that affects the lungs and digestive system. Vertex Pharma was the first to develop a drug for CF that was approved by the U.S. Food and Drug Administration (FDA). As a result of this momentous achievement, Vertex's revenue and earnings, as well as its stock price, have been on an upward trajectory since the approval of Kalydeco in 2012. The company has racked up new approvals since, and its financial results continue to impress.

During the second quarter, Vertex recorded net product revenue of $1.5 billion, a 62% year-over-year increase. The company's net income came in at $837 million, representing a whopping 213% increase compared with the second quarter of the previous fiscal year. The star of the show for Vertex during the quarter was its most recent approval, Trikafta. This drug, which can treat patients with the most common CF mutation, racked up $918 million in sales during the second quarter, more than all of Vertex's other drugs combined. 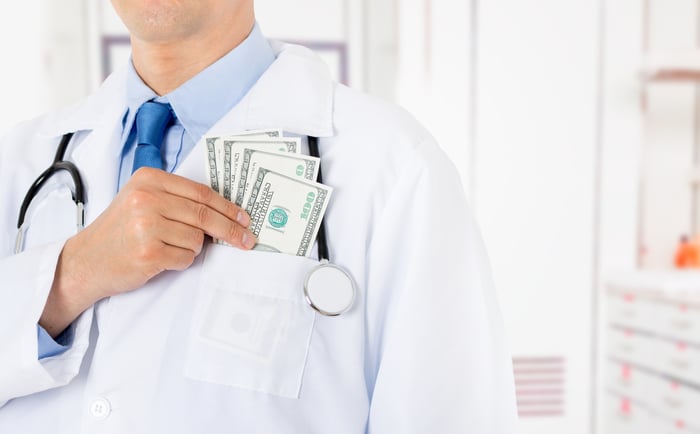 Even better days are likely ahead for Vertex, largely thanks to Trikafta. But the company is also looking at other avenues for growth. Vertex's pipeline includes other potential treatments for CF, but it also shows the company's focus on additional challenging targets. Vertex's CTX001, which it is developing in collaboration with CRISPR Therapeutics, is a promising treatment for sickle cell disease and transfusion-dependent beta-thalassemia, both of which are blood disorders for which there are few therapy options.

Detractors could point out that Vertex is an expensive stock; the company is currently trading at 34.2 times its earnings, compared with a price-to-earnings ratio of just 17.9 for the SPDR S&P Biotech ETF. Even so, I believe the company's overall prospects justify this valuation. In short, Vertex remains an excellent biotech stock for investors to buy.

Provention Bio, which has no products on the market at the moment, isn't nearly as well-established as Vertex. However, there are good reasons to seriously consider buying shares of this biotech stock. One of Provention Bio's leading pipeline candidates, PRV-031 (teplizumab), is an experimental drug meant to delay the onset of type 1 diabetes (T1D).

The diabetes market is vast, unfortunately. According to the Centers for Disease Control and Prevention (CDC), about 34.2 million people in the U.S. have diabetes, and 88 million suffer from pre-diabetes. While the majority of these patients -- an estimated 90% to 95% -- have type 2 diabetes, which tends to come on during adulthood, the market for a drug that could delay the onset of T1D would still be very exciting.

Provention Bio has already proven that PRV-031 is effective, too. In a phase 2 clinical trial, a 14-day course of PRV-031 delayed the onset and diagnosis of T1D by a median of about three years compared with the placebo. Based on these impressive results, Provention Bio initiated a rolling submission for a Biologics License Application (BLA) for PRV-031 for the delay of T1D in at-risk patients in April. The company expects to complete this process by year-end.

This means that PRV-031 could earn regulatory approval sometime next year. While a lot could still go wrong for Provention Bio, I believe PRV-031 will earn regulatory approval and go on to generate more than $1 billion in sales, just as the company predicts. Provention Bio's market cap is only $722 million, and considering the company's potentially lucrative opportunity -- and the fact that its shares are still down 17.9% year to date -- I believe this biotech stock is worth buying today.