Unless you’re involved in cellular-biology research, you may not know about electroporation, which is a powerful yet basic method for delivering small molecules (RNA, DNA, drugs) across cell membranes by application of an electrical field. It’s used in situations such as genetic engineering of cells related to drug- and DNA-based vaccine delivery, whereby a tool called an electroporator applies a jolt of electricity to temporarily open cell walls.

(Technical aside for non-biology-lab audience: One of the roles of a cell membrane is to serve as a protective border, isolating the inner workings of a living cell from the outside environment. But with a brief jolt of electricity—electroporation—that membrane will temporarily open and allow foreign molecules to flow in. This process has been used for decades in molecular biology labs for tasks ranging from bacterial detection to genetic engineering.)

Quality test equipment and tools can be expensive, even for relatively simple ones such as electroporators, which deliver a controlled, high-voltage spark and can cost hundreds or even thousands of dollars. To enable smaller labs and schools to do experiments, a team at Georgia Institute of Technology (better known as Georgia Tech) developed a simple, inexpensive, handheld electroporator dubbed the ElectroPen, inspired by and derived from a common household piezoelectric stove/barbecue lighter (Fig. 1). 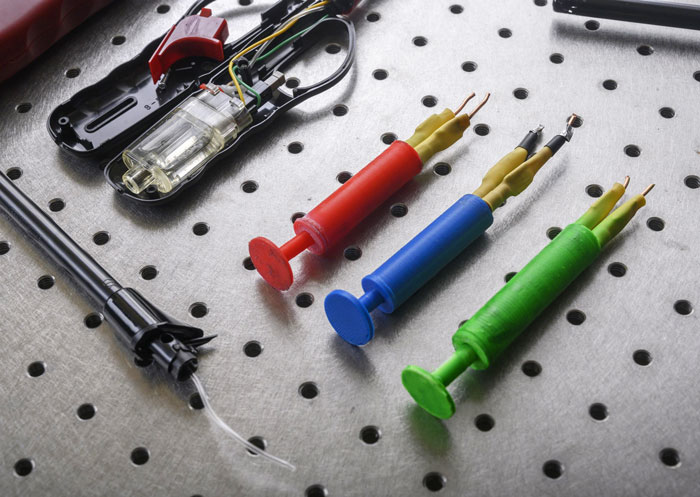 1. Shown is a common butane lighter (left) from which researchers obtained a piezoelectric component used in the ElectroPen (right)—an inexpensive electroporator that has a 3D-printed case. (Source: Georgia Tech)

Unlike commercial units that require batteries or an ac power source, this electroporator is self-powered by a piezoelectric crystal, thus reducing cost and complexity. It delivers repeatable exponentially decaying pulses of about 2,000 V in 5 ms.

This electroporator wasn’t a one-time “hack” where the objective was simply to successfully repurpose the lighter to another role and then conclude “good enough, now we’re done.” Instead their project encompassed upfront material analysis including measurement of various piezoelectric crystals, performance tests like assessing consistency of applied force and resultant voltage output, and even issues of manufacturability at the Georgia Tech location and independent sites (Fig. 2). In addition to electrical and mechanical evaluations “at the bench,” they also used their device successfully for its intended electroporation experiments. 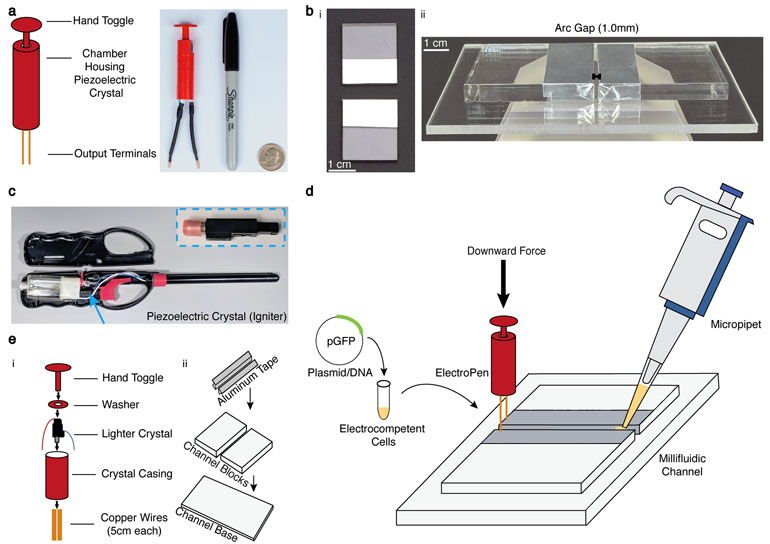 2. ElectroPen platform: (a) Design of the 3D-printed low-cost electroporation device along with a depiction of its size scale, demonstrating portability. The device is operated simply by pressing down the toggle to trigger the piezoelectric mechanism, resulting in electrical discharge. (b) Design of the alternative electroporation millifluidic channel. The millifluidic-channel design consists of two blocks (shown here in acrylic) covered with aluminum tape to act as electrodes and placed on a base with a gap distance of 0.1 cm. The millifluidic channel can be built out of other materials as an alternative for industrial equivalents. (c) Depiction of the origin of the piezoelectric ignition mechanism found within the common stove lighter. The inset is the striker/piezoelectric mechanism of the lighter. The region with the red cap consists of a metal housing encasing the piezoelectric crystal. The middle black region consists of the spring-latch mechanism that strikes the crystal. The bottom black region (rightmost) consists of a wedge that’s the origin for user-applied force and triggers the spring mechanism. The toggle on a lighter directly exerts a force on this mechanism to produce a spark. (d) Illustration of the general protocol for using the ElectroPen system. The cellular suspension is added to the gap in the millifluidic channel, after which the ElectroPen is connected and pressed to trigger a voltage potential. The cell suspension is then recovered in Luria Bertani broth (a commonly used nutritionally rich medium for culturing bacteria) and plated. (e) Illustration of the individual components of the 3D-printed ElectroPen platform and custom millifluidic channel. (Source: Georgia Tech)

For example, the team tested several different lighter crystals to find ones that produced a consistent voltage using a spring-based mechanism with a 1000-frame/s camera to study the device mechanics in slow motion (Fig. 3). The final bill of materials (BOM) included copper-plated wire, heat-shrink wire insulation, and aluminum tape. To hold it all together, the researchers designed a 3D-printed casing that also serves as its activator. With all of the parts on hand, the device can be assembled in 15 minutes. 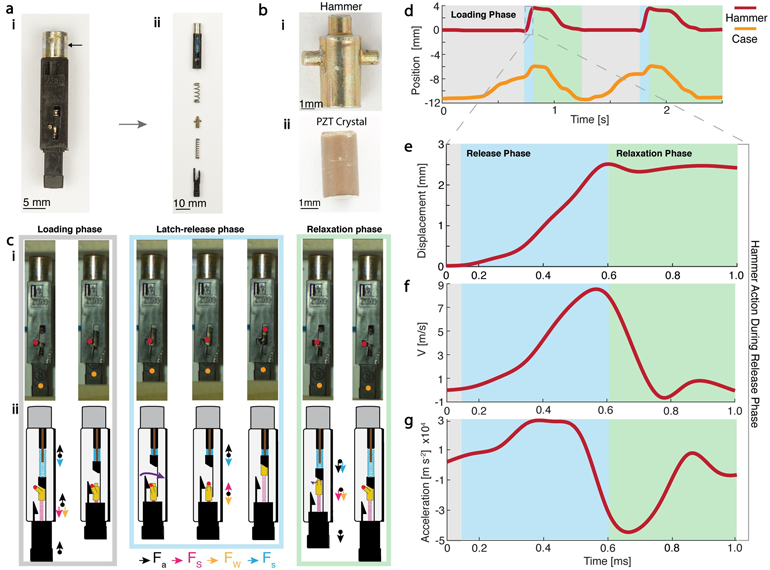 3. Spring-latch mechanisms for repeatable generation of high-voltage pulses. (a) Image of the striking mechanism (hammer action) found within the piezo igniter in a lighter (arrow indicates location of crystal) (i). The parts include, from top to bottom, metal conductor (gold-colored region) housing the piezoelectric crystal, springs, hammer, release spring, and geometrical latch (ii). The presence of two springs is to decouple the loading and release phase for consistent voltage output. (b) Images of the hammer and PZT crystal. The circular surface area of the hammer comes into direct contact with a pin that strikes the piezoelectric crystal, generating a voltage through the piezoelectric effect. (c) Snapshots from high-speed video illustrating the position of the hammer during the loading, latch-release, and relaxation phases (i). Free-body diagram indicating movement of each part through each phase of the hammer action, including activation and deactivation of spring forces (ii). (d) Plot of displacement of the hammer and the lower case as a function of time obtained using high-speed image video. (e,f,g) Zooming into the dynamics of the hammer during the latch-release phase reveals that the hammer achieves a peak velocity of 8 ms−1 in 0.5 m/s, which corresponds to an acceleration of 30,000 m/s2. The explosive acceleration results in a 10-N force (mass of hammer is 0.3 grams) exerted over a tiny area of the PZT crystal. (Source: Georgia Tech)

Noted M. Saad Bhamla, assistant professor in Georgia Tech’s School of Chemical and Biomolecular Engineering, “One of the fundamental reasons this device works is that the piezoelectric crystal produces a consistently high voltage, independent of the amount of force applied by the user. Our experiments showed that the hammer in these lighters is able to achieve acceleration of 3,000 g’s, which explains why it is capable of generating such a high burst of voltage.”

As a final confirmation of the design’s practicality, they shared the design files, sample protocols, and digital instructions with research teams at other institutions, who were then able to build and use their own low-cost, DIY electroporators.

A detailed schematic, BOM, links to component sources, assembly instructions, and related documentation for the ElectroPen device project are in their published paper or being made available along with the files necessary for creating a 3D-printed enclosure. The paper “ElectroPen: An ultra-low–cost, electricity-free, portable electroporator,” published in PLOS Biology, closes with a realistic assessment of the capabilities and limitations of this device compared to commercial ones. The Supplemental Information available via the same link also includes numerous text and video files covering design, test, and evaluation. The project was supported by the National Science Foundation and the National Institutes of Health.